She didn’t like to look inside because she didn’t like recalling that one needed, almost always, to keep looking deeper. Which meant, in turn, one could never reach the bottom, so the process of looking, once begun, became permanent. If she knew this though, she thought, didn’t that imply she’d already looked before and was therefore looking now? The hand opened and closed. It was not attached to either of the appendages you’d think. It was colorless and silent, opening and closing like an eye. It was behind her eyes, in a sense, in a box, inside a face which was not the one others saw. She, like anyone else, had many faces, and the surface face the least ancillary one. The hand opened and moved itself forward, like a spider. Tap tap tap, inside her brainbox. It reached out to pet something—an imagined head, Emily’s head, which was intact at this layer, unscathed and recognizable, containing all its own layers and levels and spiderlike hands. The hand enjoyed itself. It ran its fingers through Emily’s dark hair. Emily’s hair was made of liquid and it pooled lower down in a fragrant puddle. She walked with Emily through an empty department store, where all the labels on all the gleaming items were in a language Emily knew but she did not. This created an agreeable psychic distance between the two, which they each coddled with hands inside their heads. She picked up a bright green can with a picture of a watermelon slice on it and held it up to the light theatrically, as if inspecting, or showing a baby to the world and the world to a baby. Emily said, I like your black lipstick.  She said, I wish there were no pictures on the products, so I’d really have no idea, and then you could take me around and let me guess each one before telling me the truth. The hand was covered in a dense, sticky web which would take years take years to wash off. The hand was barely recognizable—bulbous and disfigured. Light could not pass between the fingers without distortion. Emily said, Close your eyes.

It’s incredible that I have to keep living all the time, thought Rex, waking with a hangover. So many things can be turned on and off. So many buttons can be pressed. But then there’s this. He peered at himself in the mirror. At the center of his chest was a round concavity where, in a video game or TV show from Rex’s childhood, some kind of crystal might have been inserted, and Rex thereby transformed, his body remaking itself, the hidden interiority brought to the surface, skin made shiny—a confluence. To be the same inside and out; to bring two ends of a binary together; to make a circle, fill it in and press it. But to have to keep living, every time and all the time, even after wanting to die on so many occasions? When I say something stupid, thought Rex before the mirror, and I convince myself it doesn’t matter because the person I was speaking to has already forgotten it, but I myself can’t forget it—what then? I’m still a little fleshy boy sitting inside the dark pit of my body. I hold myself hostage. I throw my self into a pit.

The voice he was listening to drifted in and out of the furniture of his room and body. His body was like a piece of furniture, it said.

The hair on the back of the head of the boy in front of her was frail and semi-translucent in a way that reminded Lanyard of Rex. She thought about Rex laying his head on her lap while the two watched TV in her apartment—the way she played with the weightless bangs, careful to always keep her hand at the front of his head, though she couldn’t keep her eyes from straying towards the bald spot, almost unbearable to gaze upon from such close proximity. Vinegar-colored threads sprouted too straight, as if Rex’s body were coursed through permanently with static electricity, and beneath: the irritated, dry scalp. She possessed a regular yet irrational fear, particularly after they’d smoked, that a piece of dead scalp would flake off and find its way toward contact with her own skin, whereupon it would attach itself immediately and irreversibly. Transmutation. Within moments, perhaps instantaneously, there’d be no way to distinguish the edges of the skin flake from the edges of her own body. This always only happened when Rex was laying his head in Lanyard’s lap at her apartment. The lighting at his place wasn’t as glaring as at hers, where, even after she’d replaced the overheads with bulbs of a substantially reduced wattage, Lanyard remained convinced she could differentiate the various layering of Rex’s flesh. She could see gradual decay, discoloration. The top layer was so white as to appear almost clear, and through this lens, as if she were a geologist studying sedimentary levels, Lanyard observed the systematic birth and death of Rex’s skin cells. When this happened, Lanyard tried to concentrate more intensely and actively on watching TV than many people ever have or ever will. 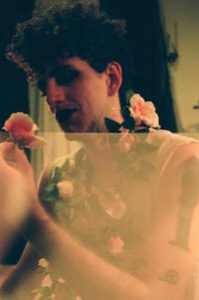 Terra Travis is a writer and multimedia artist living in New Orleans, LA. Her writing has appeared previously in New Delta Review and Fanzine. She holds an MFA from the University of Notre Dame. Find her on Twitter @burls4ever.