Midnight in the Broken Arm

[pellets falling into the sediment of an uncovered earth]

Collapsing echo spinning night within the green lawn spreading out into the path forgotten by the wind’s last terminology; the Earth inverting sound bar into fluorescent enclosure appendix incorporating a slight voice from the satellite object; a slight voice echoes iridescently, dies spinning, not letting the blooms catch a hair, within a plastic cup, selecting lottery, owning a place and fragrancing the perimeter with the last salt; fractioning the muscle reaction entirely crunching down every obstacle in intensive paragraphic simulation (the destiny khaki writhes openly in a pile of deep orange maple leaves), a surface solves itself equidistant from the glass site of catastrophic differences of opinion, slipping under opinion, turning poisonous and diamond-shaped, spatially neglecting, the side of a brick building with no entrance. Two trees. One dumpster. A snowy field, manifesting the hardest chill, skeins of earth building frost; rising shelflike, echo chambers of the rage radio make lightning. Scattering fingers open palms in a grey field. Opening a cardboard box there. The cage that falls.

An upside-down diagram in flight, chalk mark fluke as determining shovel full of implemented defense security details, hate paragraphs, indeed entire bales of common knowledge placed within the plaid of a pale hand; incorporating shovel (dead expanse) and ore sample determining what is done by the sweat built into the river blowing open silver wrought and filling the air with self-imploding windchimes. The curvature of something related to a font drills itself into the side of a cube muttering video language from the inside of a different limb, unused, implementing the corpse until such fractal light source turned to sand and flailing at the utensils of a profile (dead expanse) poised in a garden of seasonal depresh, filled with the burnt offerings of olfactory samples, purity let out of a small pyramid equipped with end cues, pages ripped from bad landscapes, contained within multiple transitions, too far into the crowd, reaching one’s hand out and being completely lost, collating;

death a cube with points going through it. A sphere placing falling metal into another sphere. Fifty-two years of a yellowish smoke, the karaoke bar, the buffet half-lit in strobe-light intensity, completely posed within a fragment of a dream’s caustic memory; dubiously included in portal collapse, grotesque total page nightfall only ever paid for before this moment crushing small attempts at ladders letting themselves out of the clenching hole, black and white and unrelenting; a small portion of the wall is glowing; a Helmet that incorporates hearing circular in a bad theater of throbbing hand signatures; Super Gothic and turning into a carpet and turning into a sphere and turning into a sandbar; cluttering the red notice of a time signature caught dripping on the quotient of the nemesis spiraling into offhand pocket pulsating all vowels in descending corrugation bent with the magnetic fields of the forgotten people sitting on the staircases and willfully relinquishing their faces for a flag. Logo collapse within a vacated control self sync; gloves on paper polo link cuff head mouth face earpiece in supergraphic obvious dead tea red outline stabbing everything within it with a spoon sharpened from electric eels born from diner hate were thrown upon its semi-porous comp shield. Collapsing it into tie, wristwatch, bad tie, dimension binding wristwatch, gesture forever, every moment buckled into the unit of its thing, branded sideways into a flesh wall we continually create, confining oneself into further and further undetailed representations of cartoons of success one conceived burning in through morning light and lighting it all off with neon tears

conforming on a collar that was not owned and never belonged to the entire beach becoming pure tragedy and anxiety becoming a bloody nose randomly chosen between a lineup of spontaneous necklines; rocks as far as the eye can see.

A fold in the hand’s stricken cobalt glow Bent folder

An underlined portal lays itself across=contrived mall collecting fountain square=double helix=a certain copyright=editable ethics caught carved on the hole of dying white conglomeration=season of disgust=it must be cut open like a wound fruit=ellipsing with the balm of its dripping wound fruit=juice spilling from the mouth of a predator=several dark corridors fall downstairs into one another and cease falling forever with a sonic finality;

ominous base, pluperfect range of motion, the prosthetic fountain placed full center in the probability lens lending itself dust conducting the reductive target warbling feverishly at the impact site; Goth Skull total remnant found there baby ruin in soft dirt scraped off with a fine brush likening blue squares in gesture tangent to ads with cumulative greys; it justifies its representation in mist shroud of wandering column breakbeat a collective redirection on birdshit immacula wreathing filligreed ferroconcrete carved with the shapes of kites; the fountain flows salt when the red eyes glow at the ominous base of the Mountain Which Deleted Its Own Name before memory could impale it with an optic nerve of charcoal burnt wielding strikethrough in total month collapse plugin consumption bad civic stadium monument maximum sport credit approval; lava; the innards of the earth spraying out in rivulets of fire forming a smiley face on the inverted glass of forgetting, aluminum shards raining down on clouds compressing their propellers, a frequency singing “No Signal” with blast beats replacing column tangents in charcoal

Returnal; calendar document imploded, destroyed itself, made a ringing noise; a server made a sound and melted; the fountain again rears its thousand heads, hydra of crude oil, inverted bod plugin due to the fact limbless clouds built shelter from the ash and agar around it and calling definitions months and months war and war definitions and capital gains cursive lettering on a proclamation built in writhing adamantium enveloping a core of dehydrated fact; that portcullis of truth contaminated the fire driver with its own ink and lack of access, coring, splitting out those atomic serifs that came to define the politics of a slammed cabinet, drop shadow a wet rag on plausibility; bridge privileges the gap; a rope bridge of snakes drops planks into chasms full of pills spilled from pockets and pink slips for bed rest; pink serifs on slips pink leather and the tongue a porous contract marked by that deleted fire from within the center of the Helmet’s labyrinth; clocks suddenly explode in liquid vowels ululating, creating new leagues and tangents lacking vestigial digits; now a hand covering the mouth a glove melting off dripping upward, a drizzle of fabric; credits rolling into lakes of quicksand necklines swelling and breaking out of glass entrapments that contain the head, puzzle fabric aligns the Helmet; architectures of saturation melt down into hybridities gap, their leaden interiors vexillate; churning logos indiscriminate, graphs learn to thresh from framing the sky’s spiral, shot through with pellets raining down,

The system needs its fuel, unfettered by sky’s lack of transition. See the dead graph inflamed in the falling corridor of the broken arm.

All that will be left is the hot core of the sun.

[a set of eyes emerging from beneath the uncovered earth] 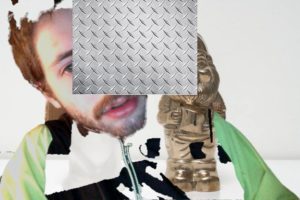 Barrett White is a writer and artist. He is an editor for Tagvverk.