Letters to My Son

Here is a letter to my son about hijacking, ‘brought to you by the letter D,’ he says. It begins with deception, the plot of Columbo which leads to Homeland. This is the story of Jack Bauer. This is the intentional construction of a narrative. It begins in bowed legs, rising through a curved spine. My son leans into lies. The doctor says he’ll stay flexed until the winnowing of his infant body. Do you think, if he lies long enough, rewiring will hurt?

Son, it might not be bad–the hide, the tusks, the glut of nostalgic shows on your DVR, how blood sounds in a blister. What do the billboards say about your life? Even as they razed us, the cheers continued. You are not DJ Jazzy Jeff. But, sometimes I hear you cry. The ‘90s have scattered to the coroners. Were you aware that cooperation makes cucks of everyone? Is it so important to wink? Must everything be cloaked in layers of irony?

Son, it wasn’t always this way, the wolves shot point blank, helicopters beating like owls. I once went to college. My son, here the debris sprouts legs. During an eclipse, warped metal and ash still sing. Here’s the new world. Because you’ve shed it in the first year. All the while, the cities lost their feet.

Son, what do you know about collusion? Once I saw a girl fight a man in the street. Don’t look away. Do not sit on the couch, your feet braced by rebar and trash. Come up on it. Didn’t I teach you hope? You can ignore the burst of alarms, but age is cursory. At one time our concerns were logged, recorded, felt. But, maybe we’ve been preparing for this, since I was younger than you now. 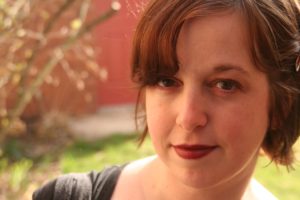 Amanda Marbais‘ fiction has appeared in The Collagist, Moon City, Joyland, McSweeney’s Internet Tendency, Apalachee Review, and many other journals. She’s written reviews and cultural essays for Your Impossible Voice and.