The floor is polished linoleum speckled with red and orange flecks over beige; Del leans over his knees, staring down.

“I can tell you one thing,” he clasps his hands as though in prayer, “and it’s a secret.”

The air conditioner humming, the room waits for his reply to himself; no cross-talk is allowed at this N.A. meeting.

Del holds a styrofoam cup of coffee between his hands, absorbs the heat into his calloused palms, fingernails edged with grease from working on the engine of his 72’ Triumph.

He taps the thick sole of his work boot to a rhythm no one else can sense, his internal beat.

“No one is going to tell you the truth as I will,” his voice cracks with the years he spent smoking fading, his clear voice splintering through his vocal chords.

“Truth is,” he sets his coffee cup down, raises a palm to the drop ceiling of the church basement, “sobriety is the only form of time travel there is.”

He scans their faces in the circle of seats around him. His forehead feels hot, sweat building on his upper brow. He watches the minute hand of the electric clock, above the back door, circling.

Del shakes his head back forth, “I’m back to who I was before I ever touched the stuff, any of it.”

With this, he waits. Someone begins to clap, haltingly.

“Time travel, I’ve done it. I’m back to who I used to be, working how I used to work, reading what I used to read: National Geographic.”

His sweat grows cool across his forehead, a cold snap running through his body. He shuts his eyes, seeing pictures from his magazines: aquamarine waterfalls zigzagging all the way down a rocky cliffside, an orangutan and her baby, the unfurling, electric-green leaves of a jungle canopy letting in a scattering of sunlight— just enough for what is on the bottom to survive. This is what he needs, just enough light in his life to survive.

“Where did my time go? That’s what I want to know,” he opens his eyes. “I think I was living in outer space, floating near Saturn’s rings,” Del raises his hands as though to say hallelujah.

He looks down into his coffee cup, imagines an entire solar system compressed within the styrofoam. He would take a spoon and stir the stars until they swirled together close, then let them drift away, press back up against the sides. He would wait until the liquid cooled to lukewarm, take his thumbs, dip them in and press a star between them. Like it was an eyelash pressed between, he’d pull his thumbs apart to see onto which thumb it’d stuck. This way he’d find out what, for him, was going to come true.

One minute is left. He wants to think of a way tell to them all how it was time that tricked him, time that evaded him, time that told him he was getting more of it at the flicker of his Bic lighter across the top of his pipe. But with the flame, the universe only contracted, pulled in, grew smaller, time passing faster than it otherwise would have. Now, without the lie, he is free.

“Back to the Future,” he nods to the linoleum, “and that’s all I have to say.” 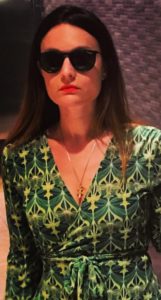 Jordan Faber is a writer based out of Chicago, IL. Her fiction has most recently appeared in TIMBER and Lunch Ticket. Her work in theater has been produced at The Greenhouse and Victory Gardens theaters in Chicago. Jordan received a BA in Creative Writing from Knox College and an MFA from Northwestern University, where she earned a Princess Grace Award nomination. She has worked as a fiction editor for Black Spring Press in London and in development for the Sundance Channel. www.jordanfaber.com