from The Autobiography of Don Whiskers

He was born under the sign of Aries with restless birth winds. The port o potties are tilted.  Nicole  rubs  his  hair.  There  is  some kind of celebration. Bricks in the oven, pulled out, put together with a tasty filling. Around & around  with  little boxes,  if you  smoke please try Carlton. She tries Carlton. He gets a  Mars  bar. They watch the balloons, not the little ones, the big ones. You stand in a basket, the hot flame shoots you into the sky. The rain patters into mud  muddles.  She  takes his hand, the blue colouring of the lolly drips down  his chin. Someone  is standing on  it, next to the meat truck, a  pound  note. Under  one  foot and  then another, he waits for it, the wind kicks it away. A hairy  stranger  blows smoke through the nose, a thick fingered stranger counts back the coins. Try not to draw too much attention, you don’t want  someone else to spot it. He makes  himself smaller and  smaller, in and  out of the crowds, he tries to catch it, the wind kicks it away. The balloons rainbow the sky.

There is someone in the bushes, hugging a bottle, their feet sticking out. They kick him in the ribs, roll him over,  kick  him  some more, the pleading, no drunks allowed, they chant, he pleads, but they keep kicking. He retires to the fields, and a little  further, the hole. He peers into it. His secret stash,  a  red journal, the ink soggy. Scrubbing under the skin, it is hard to scrape it. He can never feel clean. Beneath the ink, more ink, smudged forever. The nebulous human of the fields. 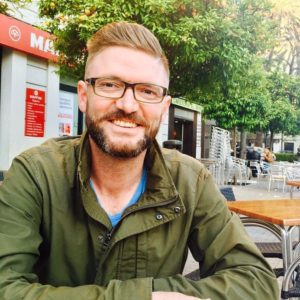 Born in Portadown, Northern Ireland, Marcus Slease has made his home in Turkey, Poland, Italy, South Korea, the United States, Spain, and the United Kingdom – experiences that inform his nomadic surrealist writing. His poetry has been translated into Danish and Polish, featured in the Best British Poetry series, and has appeared in Tin House, Fence, and Poetry Magazine, among others. Currently, he lives in Castelldefels, Spain and teaches high school literature in Barcelona. He is working on a trilogy of nomadic surrealist novels. His latest book is The Green Monk (Boiler House Press).