In the beginning was the girl and the girl was lost. She forgot the way home as soon as she left it and spent her days foraging for love in dumpsters, attempting to tamp the quiet rolling panic of her insides.

Of course the girl had been warned of the wolves. Big and bad: the kind that swallow innocent relatives and blow the house down after. But the girl had been cultivating a curiosity inside herself, the same hungry inquisitiveness that leads the heroes of horror movies into dark spaces with nothing but a flashlight in hand. The girl was unprepared but could not resist temptation, and so it came to pass the wolf walked through her door one day.

The girl and the wolf made it work for a time. The house remained a whole. She explored the domestic sphere by hanging wet lingerie from the curtain rod and baking different kinds of pie. Meringue and sometimes apple, always sour on her tongue no matter the sugar she added. The girl and the wolf fell in and out of love ninety-five times a day. He slammed the door coming home and she hated him. He curled up against her in bed and she loved him once again.

Of course the wolf was hungry. His appetite was always there, haunting everything they did. She bit her lip swollen and he kissed her for the taste of copper. The television was always on in the background: a man shooting a woman, a man winning a war, the wash of blood linking every moment of conquest. And the wolf watched silently, his jaw taut, never saying a word.

After a time the girl realized they’d united in delusion and tried to make a home in it. The confusion of love and want. But it was too late. Every night the wolf tucked her into bed, each time pulling the duvet a little bit tighter around her neck before skulking back to the television, to watch men kill each other for viewers’ pleasure. The girl learned to fall asleep to the screaming. In her dreams the wolf unzipped his skin and stepped out of himself to reveal a man with calloused hands and a pointed, shiny smile. 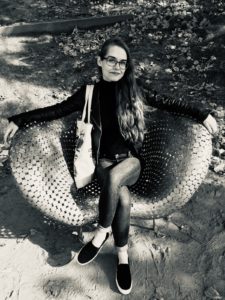 Abigail Oswald earned her MFA at Sarah Lawrence College and currently resides in Connecticut. Her work has appeared or is forthcoming in Cosmonauts Avenue, Firewords, Flash Fiction Magazine, Linden Avenue, and elsewhere. You can find her online at abigailwashere.com.