The Boy Squads: EVIL IS HERE, Side One

All songs written and performed by Lorits and Malthe

Produced and Engineered by

What’s up! We’re the Boy Squads. We live in Copenhagen. We’re an Anti-Oedipal anti-Fascist decadent anarchist homo no wave band, at least that’s what our Svengali, A.M., tells us. He says our sound is still forming, but that’s okay, because everyone’s aesthetic is in perpetual formation. Send us fan mail to our PO Box which is located in a little corner of our Svengali’s skull:

Running away from the massacre

That match their eyes

Running towards the massacre

Must find these boys

Must find a way

To comfort… all these boys

Everybody wants to die

‘Cos life’s getting worse

Bring me a boy

Everyone wants to die

I found a boy

Hiding in a spider hole;

So I captured him

And put him on trial

For crimes against humanity;

And I found him guilty

So I executed him a little bit early;

I found a boy…

You’ll do the erase

You can start with my face

I don’t care how you do it

Just do it for me

And then erase me

Everyone will line the streets

And welcome us with flowers

Life will be violent and orderly

I won’t be visible

I will be working behind a desk

Organizing the strategies and movements of

There’s a gravedigger waiting for you my love

He has a shovel with your name on it

I don’t mean this figuratively:

Your initials are on the handle

Death destroys the relationship between the figurative and the literal

He’s leaning on his shovel

Standing next to a plot

That fits your dimensions exactly

Love destroys the relationship between the figurative and the literal

In Copenhagen, there is a gang

And it’s called the gang of longing

The gang of longing is the most dangerous gang

In Copenhagen, all gangs are beautiful

But the gang of longing is the most beautiful gang

I took a knife and slit the throat of my longing

But the longing went on, went on 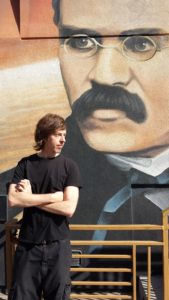 Alistair McCartney is the author of two cross-genre novels The Disintegrations (2017) and The End of The World Book (2008), both published with University of Wisconsin Press. The Disintegrations is the winner of The Publishing Triangle’s Ferro-Grumley Award for LGBTQ Fiction and was named one of the best works of fiction by The Seattle Times and Entropy Magazine. TEOTWB was a finalist for the PEN USA Fiction Award and the Publishing Triangle’s Edmund White debut fiction award. Other work has appeared in journals such as Hotel Literary Magazine, 3:AM, Fence, Animal Shelter (Semiotexte), 1913, Five 2 One, XRAY Literary Magazine, Gertrude, SCAB, and Bloom. Originally from Australia, he live in Los Angeles, where he teaches fiction in Antioch University’s MFA program, and directs their undergraduate creative writing concentration.