That an adult is not a dead child, but a child who survived. –Ursula K. Le Guin

These are the best days of your life, you are told. Did they start when your father pulled up to the curb on what was supposed to be the first visitation day? There was serotonin sloshing in his brain, unbalancing his limbs so that they rushed through the air like snapping cables. His voice towered above your house when he called for you, and even the neighbors down the block come out to see him. Was that one of the perfect, promised days?

No; not even back inside, where you ran and wrapped yourself around a neighbor’s leg as if you could take on his size and strength and years just by squeezing hard enough. You breathed deep, found only the smell of tobacco-soaked denim inside you, and cried.

Were those days already here when a golem sprang to life from your mother’s body and chased you down the hallway, its form tall enough even in memory to block out the electric sun?

Did they come later, when, after much study, you carved the golem anew from your own flesh, and its voice became a storm, and your mother’s face the rain-swept earth?

Or were they before the divorce made inverted changelings of your parents, when you tried to assemble a plastic train track with your father? He made a loop that, once entered, Thomas and friends could never escape. You cried at first because it was wrong, but then even harder because you realized that there would be things in life you would understand that he would not, like evolution, or why his marriage had stretched and swelled until it popped like a boil.

No; none of them are the best days of your life.

Or maybe yes; all of them are. Perhaps you just lack the fluency in Herbart and Freud needed to remember correctly. Give it time: time to create replicas of the past, like the sailing ships your grandfather builds inside bottles that are smaller, altogether more peaceable versions of the real thing; time set to the land itself and traversed, so that when you call back home, the distance can be measured in hours as well as miles. You’ll look across that divide and laugh at how the world and your very being were once small enough to slip inside a drugstore greeting card.

But if you can hold that sound of relief in, if you can stare into the silence and remember what you see, and if you can fill your lungs with ash and pus and keep breathing, then there is a chance for more.

Store it inside until you have a name for every molecule, and when you finally exhale, a locomotive shall ride out, following twists and turns without going in circles, on a course for some far country beyond the West Coast. What and who you might find there is beyond your comprehension, and on the ride back from your father’s apartment, radio on, Goo Goo Dolls playing, you can no more see that place than the stars above as they are extinguished by passing streetlights. Yet it too remains in the high-pressure sodium darkness, so you stare at the sky, and wait. 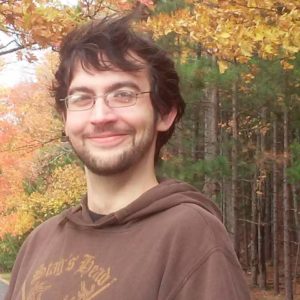 Ethan Brightbill is fiction editor of the literary journal Lammergeier. Originally from Pennsylvania, he has crept westward through Iowa, Michigan, and Nebraska to Utah. His work has most recently appeared in The Indianapolis Review.