The word cirrus comes from the Latin word for a ringlet or strand of hair. Cirrus clouds, in hair-like fashion, paint the sky with wisping cotton tendrils. When I was a little girl my grandmother and I sat in her car and looked out the front window in awe as streaks of cirrus clouds levitated and curled across the heavens. I haven’t seen clouds like that in years, she said. She called them horsetails, though they looked to me less like hair and more like delicate feline whiskers. My grandmother’s hair matched the clouds—it was perfect and silken and white as heavy cream. We took note of the clouds that day, and I haven’t seen cirrus clouds like that since.

The omnipresent and ephemeral nature of clouds confounds me, I marvel at those strange beings caught in between liminality and perpetuality. Clouds envelop and hold, but are amorphous, ever-changing, weightless. Magically suspended in air, they look delicious—ebbing and flowing like streams of golden honey and mashed potatoes and piles of freshly steamed rice and silent oceans of lemon curd, often gilded in light. At once, I know that they are merely reconstructed water. And somehow I still wonder at their quixotic forms as they drift in the sky like fluffy half-formed amoebas, or messes of entangled swans. Mythical creatures always barely beyond reach.

The softness of clouds, the breathiness of their bodies, is a place I want to reside in, or hide in, stuff in my pockets to take out when everything becomes too much. The cloud is unlike anything, and so naturally I imagine that it has magical properties to heal and comfort, maybe. Let me blur the edges of my hatred with clouds, let me steep in their piety to distill my own impurities, let me be held in their flawless embrace to fill my loneliness, like I would with some unknown, yet comforting mother.

In nephology, the phrase “mother cloud” denotes an incipient cloud from which other clouds are formed, often used in cloud classification. Clouds morph and transform from one type to another with a seamless grace, perpetually in limbo, thrumming with the beat of change. The cloud mother, then, exists as what the cloud came from, the memory, the first layer of the palimpsest.

But perhaps clouds are the mothers of stars—I dreamed this a few nights ago. The clouds wrapped their feathered fingers around nascent suns and nurtured them in suppleness, glowing luminous in the light of the fiery, nebulous children. Clouds make elegant, though temporary, mothers to the stars.

Like my own mother, that created me in her womb from mere cells, a small glowing star in the heavy, swelling moon of her stomach.

I have been sculpted from the quiet foam of my cloud mothers, as they have metamorphosed across time from birth until their eventual deaths. Cloud mothers create and birth and die, they spring forth out of the oblivion and recede back into space once they have spent their fleeting time, such peripatetic women.

While at a concert in Copenhagen, I watch swaths of cigarette smoke fill an old warehouse as the gritty music progressively gets louder and louder and louder and the smell takes me to Floridian afternoons drenched in humidity at my great-grandmother’s house, a slumbery house encompassed in a forest of massive oak tree cathedrals, swirled with Spanish moss. My great-grandmother Eleanor’s hair swam like pellucid cumulonimbus strands in curled waves around her head, while the veins of her arms converged with cavernous wrinkles forming estuaries across her body, down to the tortuous knots and eddies of her withered hands.

The scent of cigarettes was ever-present and dominating, something that even today I yearn for and inhale deeply whenever I can, that lovely cerulean-hued memory.

Her house was flooded in the ocherous scent of soil, too, probably from dirt scattered across the floor, in the crevices of the vitreous bathroom tile, underneath her fingernails.

Looming over all of this in my memory is the antique electric organ that I would press my hands into, resulting in the satisfying emission of some hideous chord. I loved that thrilling cacophony.

It is only these materialities that I can recall about Eleanor, the rest of her has floated away, gone with her ashes as she was scattered into some unnamed gulf for lithe fish to nibble at. Still, somehow, she resides in my body, her fragmented presence is within me, like some sort of memorious residue stuck to the edges of my skull. I am reminded of her at times, even though I never truly knew her. Others say I remind them of her, too, and if you peeled off enough layers of me she would be underneath, nestled inside some sinewy cocoon.

Like most clouds, cloud mothers are everywhere and nowhere. Often while taking showers, I lie with my back flat on the slick bathtub floor and prop my feet above me on tile the color of blushing peaches, my body forming an obtuse angle. The hot water hits my face directly so my eyes must remain closed, a welcome repose, and I feel encircled in a makeshift womb. Silky steam rises and surrounds me, a thickening endometrium. This, too, is a cloud mother.

I see cloud mothers in photos. There’s this one photo I took of a gas station sign I saw after a canyoneering trip. It reads, WE SERVE BEER COLDER THAN YOUR EX’S HEART. It’s funny and sad, because I know they’ve taken it down and changed it by now, and I’ll never see it again. There is no proof of the soul, as Rumi says. Cloud mothers, like anything, are impermanent and temporary things, sometimes nonexistent.

“Nothing exists but amalgams of matter and space,” writes Lucretius.

Cloud mothers are encountered on the subway, and in movie theaters, sometimes. With delicate underground intimacy, the intricacy of the Atlanta metro system is transformative and transfixing, like most urban transit skeletons. I sit on the humming trains of that city and encounter time, who becomes strange to me, and during the train ride people’s hearts fall out of their chests where I can see them as I speed backwards from where my brain rests, and homelessness bleeds into the budding verses of amateur hip-hop artists while coalescing into lyrical bowls of collard greens, and nobody knows who they are because they’re too busy staring at each other’s ugly and ebullient faces. I can’t remember those faces but I want to.

The forgotten and remembered beauty of the cloud mother is always ignited through involuntary memory, as Proust might intimate. “Yet a single sound, a single scent, already heard or breathed long ago, may once again, both in the present and the past, be real without being present, ideal without being abstract, as soon as the permanent and habitually hidden essence of things is liberated, and our true self, which may sometimes have seemed to be long dead, but never was entirely, is re-awoken and re-animated when it receives the heavenly food that is brought to it,” he writes.

I used to think Joni Mitchell’s song “Both Sides Now,” was a joyful one before I grew into the lyrics. My mom plays the song on her acoustic guitar with hope and regret vibrating through her voice as she sings along. Almost every time she picks up the instrument and rests its ligneous curves on her knees the song materializes. I can’t remember a time where she hasn’t evoked Mitchell, that long-haired and sylvan Canadian. At a strum of the guitar they’re fused into a single person for a few minutes in song. “Rows and flows of angel hair,” they lilt in unison, Mitchell and my mom, describing clouds. They admit that clouds, as mesmerizing as love and life, are nuisances they’ve become disillusioned with over time that they fail to understand despite a lifetime of experience. When I listen to the song today, the realization of its veracity descends slowly, like a lissome fog. For all their beauty, I sometimes can’t distinguish clouds from vehicles of pain. Seemingly, clouds can morph from emblems of nostalgia and maternity to collections of darkness, soaked in grief. But clouds of pain are also cloud mothers, and just as these clouds exchange existences between each other through the unending rhythms of water and memory, I am interposed in the midst of this process to feel all of the mothers and all the pain because I will similarly reduce to water and clouds and imperceptible particles. I rejoice in this prospect of coming back to water and my mothers, to become the mother of awakened memories and dormant dreams myself, and to be brought up again and again in the sky, condensed and released in this cycle of ceaseless remembrance, over and over, forever. 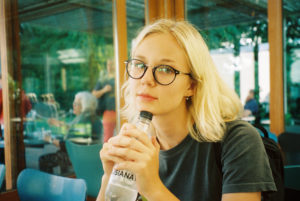 Maren Loveland is from Atlanta, Georgia. She is currently an English graduate student at Vanderbilt University.