from Work Is Hard Vore

may/june is pre-skeletal: waiting for petals to render to possess us to go it’s an entrance to caves
where they keep the body in dry ice and salt sixteen weeks of the thorn and then when the smell
has gone they’ll resubmit us to objection:

our use is when the graves have been rebottled

hence is the giant cone erupting

as the now lifts itself into the sky

to turn us into ourselves or the perfect simulation via data as selves, mineable

where is the you

which mother?
your face started by you

We only just learned to make gothic machines: a caterpillar that eats dill is the black swallowtail butterfly but it eats the dill and puts holes in leaves, and the homeowner is upset because of “how it looks.” The homeowner purchases BioAdvanced Tree & Shrub Protect & Feed. He purchases it at Home Depot. Home Depot is a workplace for 400,000 people. BioAdvanced is an insecticide. It contains Imidacloprid, which is a neurotoxin and remains in the soil for a year. Imidacloprid was developed by Bayer CropScience. Bayer is a workplace. Bayer employs 100,000 people. Imidacloprid is responsible for the collapse of honey-bee populations. The white buds are full of neurotoxins. It is a starry night. When we work, we are bidden. We are made as we work and so our becoming is a poisonous instance. The workplace is our home. Our families are delinquent. We consistently encounter the suggestion that nature is opposed to civilization and so too outside of capital accumulation. This is not true. There is no such thing as nature. There is being. When the we become terminal. We are bidden. Then the homeowner can put the neurotoxin on the dill. If there is a gothic garden, it is covered in black cloth. This is where the face is revealed and is laboring. In this castle garden, there will be red and black. The garden will be itself. It will be full of nighttime and volcanic rock. It will be melancholy and covered in creatures. The person in the garden that is itself will be a part of the garden, not different from it. The person will not be full of goods.

a goose runs by

a boy runs by

into the image of their falling down a well

a golden caterpillar
talks the image

we picture
crouching under

posted to reveal that work had ended

to be eaten
many

a glass bowl and drapes 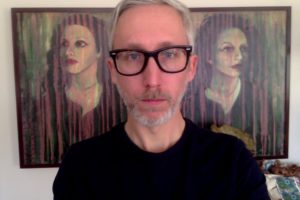