wrote poetically about colonizing the desert,

The Nation reaches its hand into the Desert.

The barred doors of the sleeping empire are

flung wide open to the eager and the willing,

that they may enter in and claim their heritage!

which sought to replace the masculine landscape with

one that could be feminized and

ready to make the desert bloom.

When God was about to create

the first human being,

then above and below,

all creatures began to tremble.

The spirit drove him west

on a conquest of arid America

for whom godlike whispers turn

demonic between pleasure and terror.

Writing himself onto the landscape,

the hinter edge in the

sand with a finger,

a thorn pulled, a river

A sign along the Grand Canyon tells you to

imagine you’re a pioneer on a horse

coming up to the canyon’s rim

gazing into the vastness,

feel the wind in your hair.

Aimless, absorbed by the sky,

the tourist gaze maps and kills,

names and maims, a grid pressed

If the waves of the sea could flow in
and cover its barren nakedness,
wrote pioneer William L. Manly,
it would be indeed, a blessing.

For whom, the cheap nature of

holding your finger in the dike long enough for the

flood to recede, horse and driver, tossed, both,

into the sea, the surging waters standing like a wall.

About the dams on the Sacramento and Columbia river,

There isn’t any way to control the river without

having any tradeoffs, and the salmon,

unfortunately, was one of the tradeoffs.

Asked if it was worth it, he smiled,

I think it’s worth it, yes,

there are substitutes for eating salmon,

they can eat cake.

The face of the hydraulic aristocracy is reflected in

every drop of water that keeps miles of lawn grasses in

Who needs fish when you can have

miles of neighbors glaring at each other while

watering a patch of grass in the desert?

the federal development of rivers,

a great pacificator, better than a standing army,

because poor people, instead of causing

would go West to seek an irrigated farm.

a Garden of Eden on Wheels,

as if pulled by a desert highway

or sucked forward by creating a

vacuum in front of it,pure speed,

triumph of the surface

brain of time scooped out.

speed as pure object where

all objects appear as they are,

truth in its surface, the smiles

in a gas station, the desert horizon,

an ocean bed in the open air,

those pans whose surface gets so dry

that water droplets can’t even touch it.

Break the cities grammars of restraint with

the miracle of the transparency of

all functions in space.

For whom the miracle of easy living

in an unforgiving landscape,

the anatomy of the womb are

they had to invent the speed

of prototype cars to cope with

There isn’t a sacrifice I can make that compares

to the eternity of a slow-motion catastrophe

that are the buttes at Monument Valley:

blocks of language rising high, their

that owe their depth to wear.

Where meaning and morals are kept alive artificially

swallowed by the remorseless horizon.

Kazim Ali talks about how

takes us to the border of

appetite and death, a

Objects project permanence, the body names and hoards
out of a fear of decay, defying decay evades capture,

when photographed as if preparing an

Not unlike pasture land that masks the desert

The poem composed in the
act of its own decomposition
places us precariously on the edge
of the annihilative powers of silence.

After a treacherous expedition down the

The canyon of Lodore was not devoid of scenic interest
even beyond the power of the pen to tell.

Board a train of silver palace cars in

the evening and will soon be whirling

away across the Great American Desert.

Fred Harvey, the Civilizer of the West, built luxurious

way-stations and Indian Detours for tourists meant to

having actors stage their lifestyle in the desert.

The Fred Harvey Company was sold to Amfac. Inc.

originally known as H. Hackfeld and Company which

was founded by J. C. Pflueger and his brother-in-law,

Heinrich Hackfeld, who later became the business agent for

the Old Sugar Mill of Kōloa, part of the first commercially successful
sugarcane plantation in Hawaiʻi where managers suggesting
Hawaiian’s have shown complete worthlessness as laborers
and described them as being so strongly
rooted in their cultural heritage that

centuries, at least, will intervene ere they will

understand that it is a part of their duty

to serve their masters faithfully. 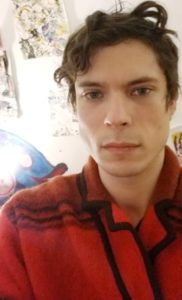