For sun-bleached months the skiff tilted against the potting shed, but today it bobs atop duckweed. Boatwrights, now long forgotten, planed teak boards and persuaded the wood into arcs around the bulkheads and stringers.

On the yard’s opposite side, corn feed and alfalfa fill the gambrel-roofed barn. The hayloft sags beneath its load of square bales and bundled silage. An oak rocking chair nods on the farmhouse’s back porch; constant breezes set the chair in nearly perpetual motion. Behind the rocker, a hunter’s bow leans on clapboard siding.

At 3:22 this afternoon the bending of things stops. The skiff’s hull blooms like a lily. The hayloft’s floor straightens so suddenly that bales rocket through weathered shingles and feed the sky a golden-green fireworks display. A rain barrel scatters its sodden planks — quivering steel straps snake across the new mud, the cooper’s craft undone.

Hogs flee in a dirty-pink stampede because gate hooks cease to be. Chickens scatter and scold their way past untwisted wire fences. An old Rottweiler frets at the sprinkled trail’s end of former chain links.

With a gunshot bang, the rocker’s legs snap flat against porch flagstones while the half-oval back launches spear-like through window glass and curtains. The hunter’s bow uncurls, as true as a rule, and its string plays a single high piano note before shredding to strands. Every coat hanger in the house releases blouse or trousers. Mattress springs quiver through the linens of what has now become a bed of long nails. The stairway bannister unwinds.

Witnesses, and there are none, might perceive a boundless expansion of the horizon: the world’s border no longer demarcated by its own curve but only by the eye’s limits. Coincidental with the abrupt unbending of all things that ever yielded, the Earth is flat. 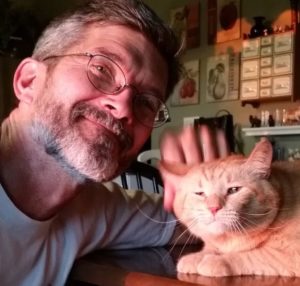 Michael Grant Smith wears sleeveless T-shirts, weather permitting. His writing has appeared or is soon to appear in Ghost Parachute, Longshot Island, The Airgonaut, formercactus, Riggwelter, Ellipsis Zine, The Cabinet of Heed, Spelk, and other publications. He is an editor at Longshot Press. Michael resides in Ohio. He has traveled to Hong Kong, Shanghai, and Cincinnati. To learn too much about Michael, please visit www.michaelgrantsmith.com and @MGSatMGScom.