The rain is grey and chemical scented. Black pines slick, the stillest giants later, now blur beyond my car window. The traffic is deadlocked. Gasoline does not make the cloud bellies purple, but I associate the two. Really, it’s just 5 p.m. and above the storm a winter sun will become water color, then night. The house is empty. Cars and cars ahead, a person is rolled up in their vehicle, all twisted metal sinking into mud. Blood and rain puddles and gasoline.

That morning he tried to hold me and I elbowed his stomach. He’d sweated in the night and his shirt was damp and cold. Really, I was half-asleep, but I meant it. My bone slipped between two ribs. He struck a fist into my abdomen by leveraging off my shoulder, turning me to my back so swiftly, as if he’d been waiting his entire life for the opportunity.

I unbuckle the seat belt and slip my blouse up just above my belly button. The bruise has sunk inward, and grown dark at an abnormally fast pace. And when the cars still haven’t moved, I open the door to soft rain, the sound of idling engines, and I walk toward the wreck. This is when the trees become giants. I am small, watching a dead man collected from his disfigured vehicle. It’s not him, of course, but I feel like I’ve waited my entire life to see someone die involuntarily, to remember the phrase “just another day,” to see personal manifestation fail in the most resolute way. Rain collects in my eyes.

And the bruise, now concave, welcomes my own hand. Though not fisted: my hand is limp, unsure as to what I’m feeling is real. Penetration, humid air sucking in light. Air we breathe while conscious that it is breathable, a creation from the trees. Drenched and wide, giant hours go one into the other until the house isn’t empty, and then night. 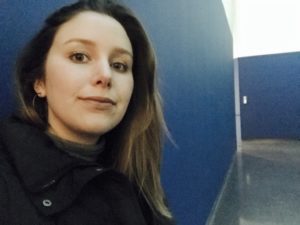 Kayla Eason is from a small town in Northern California. She has an MFA from San Francisco State University, and is a former arts journalist and teacher. Her writing has appeared in The Redlands Review, The Elephants, Cipactli Journal, Transfer Magazine, and Vagabond City Literary Journal.