Before their first face-to-face date, Sozia uses her contact console to watch grainy fan footage of Larc’s band’s shows, but the audio sounds like it has been mixed in with a vintage drying machine.

Larc showed up to their first date wearing a t-shirt advertising a band less popular than the band he is in. Sozia decided to interpret this as a sign of Larc’s generosity.

Sozia showed up to their first date wearing a green wool hat shaped like a cat. She wore the hat pulled down so that it hid the missing top of her left ear. Larc didn’t comment on the hat. Sozia decided to interpret this as a sign of Larc’s generosity.

Sozia goes to Larc’s band’s shows, and she listens careful enough that she can tell that Larc isn’t making any mistakes when he plays. Larc does not create any straight-up awful sounds. He never fumbles his sticks or causes anyone to mime stuffing their fingers in their ears.

Still, Sozia complains to Belz, there is a difference between not making any mistakes at music and being good, maybe even great, at music.

The problem with the lead singer is that he is only in the band because he wants to be famous, Larc explains later, after he has officially asked Sozia to be his girlfriend. They are sitting on a bench at the city conservatory. It is early afternoon on a weekday and there are field trip children acting up everywhere. Sozia has taken the day off of work. Larc has just woken up. They are splitting an imitation coffee drink.

The lead singer should be in the band purely for the love of making music, Larc explains. A chaperone drags a screaming child out of the city conservatory and back towards the field trip bus for a timeout. On her way out the door, the chaperone shoots Sozia a look like Sozia should have done more to prevent the child’s tantrum.

Belz assures Sozia that Larc is a good, maybe even great, musician. Belz assures her this in the middle of Larc’s band’s show. Belz is violently nodding her head to the beat of Larc’s band’s music. Sometimes, she raises her arms up in the air. This is a relief to Sozia. Belz has not had the top of her left ear sliced off in a freak figure skating accident. Belz does not work for either of the government-approved databases.

After the show, Sozia puts Belz in a women’s taxi and charges the ride to her own account. Sozia has at least another hour to kill while Larc’s band loads their stuff into the lead singer’s van and talks with people at the merch table. She regrets not asking Belz to stay, but she wanted Belz to leave while Belz was still feeling concert-high so that she would want to come keep her company at future shows.

After Belz gets in the women’s taxi insisting they meet for brunch soon, Sozia sets up shop in the one bathroom stall whose door actually locks. She is intimidated by the other band girlfriends, though she can’t come up with concrete reasons as to why.

Sozia sits on the toilet with her leggings pulled down, even though she doesn’t need to go. She pulls out her contact console and starts playing a game where you guess the missing words in a phrase before your online competitor. She hypes herself up to want to play this game for a full hour. I will feel good, maybe even great, if I get a higher score than last time, hypes Sozia. 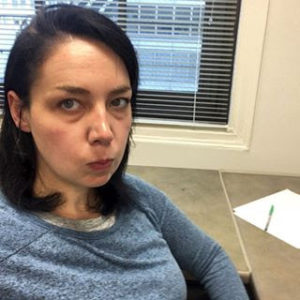 Daniela Czarny is the author of five books of poetry and short prose. She lives in Chicago. Her website address goes like this: http://www.danielaolszewska.com