We begin as babies in gravy.

Some parents are too simple, though. They’ll hand their babies off to any stranger while they sift through their bags for bus fare.

All babies, though, must be rocked to a rhythm. This rhythm gets inside their heads and determines their musical taste. If infants are not rocked, they have no sense of rhythm. (If the mother has a bad sense of rhythm, she passes on her inability to dance.)

They will end up like the children in the park, who are drunk.

Walking through the park is a “good” father, the father is in a suit, like a scientist. With a polka-dot bowtie, a real nerdy outfit. He has big bright blue hair, loosely sculpted in the shape of a bell. It is wild with white roots. He holds forth, “Why do they think I’m a bad father? I’m wearing a suit for god’s sake.” To an old leather-faced Marilyn Manson-looking fellow in two dyed pigtails, the blue-haired man says, “I’m a good father. I make sure my son walks on the side of the street closest to the grass, as to protect him.” The pigtailed man laughs, “Dad, I’m sixty years old.” The pedestrians glare at the oddly dressed men. There is some unpleasant muttering and confrontation. I suppose I am in love with the pigtailed man. In other words, I suppose I am the Asian woman holding his hand while also wearing pigtails.

The night I left my husband was coincidentally the night my friend Mona died of AIDS. Like a ghost, I found myself downtown, unable to cry, as ghosts cannot. Shaking and weak with grief in such a way that one cannot even control one’s bodily functions, neither gas nor urine nor feces, sitting on the sidewalk in a dress while people filed over me… A man I did not know went into a bar and brought out a chair for me. You might think this was the night I stopped believing in love, but it was the night I started to believe in love.

Mona’s performance art piece: sitting on the floor holding a baguette, saying repeatedly: “The smell of bread… the sound of bread… the look of bread…” while repeatedly crunching the baguette with her hands.

Sometimes she threw the bread off the balcony at people walking past. I said to her, “Don’t do that! They’re not ducks!”

Mona’s socks were red with green borders and white polka-dots. They were Christmas socks. I said, “I like your watermelon socks,” to confuse and annoy her. Then, being stoned, my thoughts flew away. I suddenly got terrified of a ball of fuzz hanging off her sock. I scuttled across the floor; she chased me with her foot. Then I said, “If I pull on this thread your whole body will unravel like a sweater. Heh heh heh.”

One of her roommates was beatboxing. Mona could rap, but that night she was choosing to dance. She danced like a marquee light that, by blinking on and off, looks like it is chasing its tail in the eternal rectangle.

When you’re standing in a bare hallway, or any place where there is a sign on the wall or next to you, whatever you are doing at that exact moment (maybe dancing awkwardly, or maybe waiting for the bus, or maybe in front of a numbered door) is a performance art piece and you are the artist and the words on the sign are the title of the piece.

For years my husband and I shared a small steamy bathroom. I would be in the shower. He would be taking a shit. The room smelled. The toilet paper was always damp. But we were happy.

I try to recreate the same situation with the pigtailed man, but the mood is no longer happy; in fact, we’re thinking about breaking up. In fact, I know he cannot stand me anymore; he wishes I wasn’t having his baby. I say something depressive like, “Life is meaningless.” He stops shitting to say, “What? You’re thinking about that son-of-a-bitch again.”

He leaps up off the toilet, rips open the shower curtain, and strangles me to death. The room smells. Water gets everywhere. What is pathetic about this is he has not even wiped.

A few hours until the end of the world, I am indulging in every vice: Marlboro Reds (choice between Camels and Marlboros at the counter), liquor, ice cream (tried to get cashew brûlée, which was an ice cream that my dissertation advisor had bought for me once in the city—just a small single scoop, just a drop of delicacy—which I would never had been able to afford myself, which is probably why it appeared at the end of the world; but, on the spot, I could not remember the type of nut; thought perhaps pecan; got a slice of cake instead; content).

I see the old house in Wyoming, where I had awoken in the middle of the night and wandered into the kitchen, to find it had been redecorated. There are copper sculptural light fixtures on the ceiling. They are sparkling; I am awestruck. Every time I look up there is a new fixture. The copper is shaped like chairs, farm equipment, an old-fashioned washer board with a row of exposed lightbulbs attached. What eclectic taste someone had! Mixed feeling of warm and cold, like warm ice. One light fixture is different: it has a lampshade: the lampshade is covered in little porcelain sculptures of mushrooms: very pleasing. I see the windowpanes papered in festival colors. Something tells me that the price for this beauty is my father’s life. I panic, run to my parents’ room, to find my mother and father both sleeping soundly, my father even with a smile on his face.

In their room is a cage of small animals, like mice. There is one lab mouse that I like. He is different from the rest. He has a goofy look on his face, big buck teeth in an overbite, and looks like he’s smiling. I try to feed him stale breadcrumbs, but the other animals snap them up. Moonlight streams through the window. Although it is dark, I can see everything out on the lawn.

A procession of flowers we did not pick: the bougainvillea, the aster, and the forgive-me-not.

A man who is deathly afraid of needles receives one from a stranger in the public square. It is placed in his palm. There is no thread attached. He does not refuse the needle because he must be polite. Nor does he close his hand around it. In fact, he extends his arm as far as possible. He divides his body into quadrants. He wills to separate himself from the hand. He traverses the public square, trying to give the needle away. He finds he can no longer bend his elbow, for fear has paralyzed his arm, and now it only tingles. But no one wants the needle, not even when he resorts to begging, not even when he resorts to stooping. There is no one in the square who will entertain his pleas. Those who listen make up excuses as to why they don’t need it. He finds himself utterly without help, stranded in the most vital sense, alone in the square. The square is visually archaic, ambiguously Gothic. It is governed by spatially domineering facades, Ghibelline-style battlements, a vague idea of symmetry. Pointed arches exist in an even number. The illusion of harmony is owed to them. There is a small, empty niche on the far left side. There is a niche with a white statue between two windows. Marble blocks that do not alternate based on any perceivable pattern or design fortify interiors where political decisions are perhaps made. A rose window overlooks a narrow, unnamed street that no one travels down. There is no focal point, nowhere to rest, except for perhaps the niche with the statue. This is not typical Gothic architecture. It represents an early stage of Italian Gothic construction: its fully Gothic character has not yet emerged. The loggia, where stone gives way to empty space, is deep. The blind arcades characteristic of Romanesque building are crowned in white. The colonnades refuse to dissolve into air. They sit like massive blocks on flat land. They do not share space. The effect is clumsy, like an epoch’s decline. This is exactly what it looked like in his dreams. It is as though no one can sense his distress. His arm is paralyzed by fear, the paralysis creeps over his body, soon he cannot turn his head from left to right. Soon he cannot speak at all. In short, he dies.

This is a revenge story. Revenge not by revealing yourself as the challenger. Instead, you must act with wit and stealth. For example, if he has laid claim on a piece of your land with a flag, you must not challenge him with a sword; instead, move the flag to another, seemingly identical piece of land ten paces to the left of the original claim; continue doing this until your opponent finds himself mysteriously by the sea. Drive your opponent not to anger but to insanity. Your greatest success is to convince your opponent he is being beaten by ghosts. 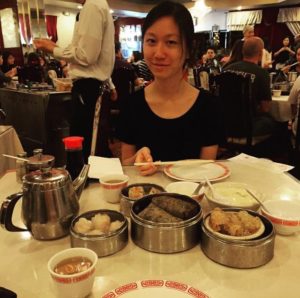 Jenny Wu is currently working toward an MFA at Washington University in St. Louis, where she edits The Spectacle literary magazine. Recently, some of her fiction was selected for WTAW’s Features Chapbook Series and, on another occasion, shortlisted for the Dzanc Books Prize for Fiction.