Emerson tells me to get her thunder. So I run upstairs to grandma and ask, please Babo, beat the shit out of your floorboards. She graciously does, which is not too hard for her because she’s always banging the shit out of things up there.

I run back down stairs.

Is that good enough? I ask Emerson.

I can’t tell if fine means fine. Or something worse. Or better. Or what.

Because I do, Emerson says. Emerson is a bit pushy. Good thing she’s a genius.

This will be tricky.

I wait for night. The heat backs off, and a cool breeze picks up.

I see them through the trees. Gentle and lazy, their lights intermittent, not like the regularly boring lighthouses. The lightning bugs move gorgeous. They pull me along in their wandering flit. I’ve jarred more than a few of them before I think to poke holes in the lid.

Get them out, get them out! Emerson screams. Let them breath! And again I can’t tell if the lightning is good enough.

It doesn’t matter, Emerson says, we’re all the same.

This is the hardest task by far. What people? Any people. I set out.

The great woman who is so unmistakably great is not acting so great right now, I think. Or she is and I don’t know it, don’t understand it, it’s over my head? I wish I knew more. Instead I’m no more than the transporter.

The man with the fop hair lets out a hideous noise when lit. I didn’t actually think Emerson would do it, but the smell of sizzle is unmistakable. The young girl is too young, I know that now, but it is too late. Emerson forks the lightning with a flick of her wrist. We’ve had it coming, she says, for a long time. The thunder calls. The girl is now singed to the color of eggplant.

I’m a good servant, and so the line of humans snakes around the block.

I bring Emerson her next victim. If I knew I was going to be recreating judgement day, I would’ve brought a more comfortable seat. For as much as I believe in Emerson, my stomach flips with the animal thrill of culling. It’s what’s needed, Emerson says, after she has burned the last of the line. And now it is our turn, she says.

You must burn me first, she says. I will show you how.

The electricity that leapt from my fingers…was akin to…I can’t describe it without tears, all the power I’d always wanted, always thought I could earn, hoped would be mine, now wielded with impunity, wisdom, scarcity and discernment. Emerson, the greatest mind in our family, of our time, renowned and infinite, spoke her last words: you must turn it upon yourself.

And she left me to it.

We all lived under the egg. Uncle Larry called it the Big Ovum, and we all chuckled. Don’t tempt fate, Larry, Auntie Arlene said, you never know. What we did know was that the egg had been here since we’d been here, since we were forced to move here. Forced, Uncle Larry scoffed, nobody forced us, we chose our home. Because nobody else wanted to live under that big ass egg, my older sister Merta said. And it was cheap, and we all know, Auntie Arlene said, how Larry loves a good deal. It was what we could afford, Uncle Larry says. Those were dark days. Enough, father shouted, it is what it is.

I played under it because it spread so much shade. I had to play by myself until all the other families arrived. Aunty Arlene didn’t like us playing under there, but she let it go. It was the best place.

It wasn’t me that did it. I swear. I was happy there. I loved the egg. I don’t know what happened, not really, other than the egg cracked and that’s when the water came out. I’d never seen so much water move so fast. It tugged at my feet almost gentle at first and then my ankles and fast up my knees before I understood what was happening and lost my balance and flailed in the currents of black water. My body was thrown into the crooks of a tree until the water drained away. It had come so fast. So fast it was gone.

And so much damage. Everywhere I looked. I couldn’t believe the egg was gone. Its shell shards floated jagged in little pools. They looked like teeth. The sun came out. Our house was gone. It was quiet. I found Uncle Larry first about a hundred yards away. His body crumpled like an accordion against a cement wall. It was hot. The birds were loud. That was the first. There were many others. They found father at the bottom of a pond two miles away. They had to use a digger to get at him. I found Aunty Arlene’s shoes along with our tea kettle. Arlene herself held on to a soup ladle she’d hooked to a fence. We found everybody who’d lived under the egg except Merta. We looked everywhere, but we never found her. No one from our new government came to help, but that wasn’t too much of a surprise. And when they did finally come, they wanted to relocate us, spread us out, decentralize, it’ll be better for your kids, think of the future. This will happen again. Move or die. Those were our choices. We who were left. I grew up.

What they didn’t know was that it was coming after them. They’d bought the cottage at the end of the road from an old woman who’d lived there for many years and kept dead songbirds in her freezer. Perhaps the woman had learned to keep it at bay, or had struck some kind of bargain.      The real estate agent had said the cottage was “nestled” into the forest on the edge of a 500-acre land preserve called the Calderwood. Who wouldn’t want to live on the edge of such a dense expanse? The forest went on and on, back and further back.

But no one told them the Calderwood’s real history, its living, breathing force. The Calderwood moved. More to the point, the Calderwood advanced. It never retreated. Only onwards. Only out. As an organism, it swelled, ate land, took soil, brooked rivers, broke rock. No one seemed to remember how just a few years ago the cottage had been set on a clearing, the woods quite a ways away. But not now.

Now they were on the edge of it. In the day, the Calderwood was bright enough. People hiked and walked dogs. Such was the public cover of its enterprise. But at night, it was a different future. The couple originally chose not to curtain the windows facing into the woods. They wanted to watch the moon rise through the trees, but then at some point it no longer felt good. They couldn’t name exactly what was wrong. Something about the darkness unsettled them. When they peered into the trees, shivers ran. They couldn’t see anything. Nothing moved. And yet, they felt it. The couple began to call it the evil, the haunted. But the Calderwood wasn’t that. A better term might be aggressive. The Calderwood knew what it wanted. It wanted growth. Advancement. To take back. The Calderwood, a host that marched to victory over the earth, had nothing against the little cottage and the couple, only that they were in its way.

The couple lost their beloved dog one night. They’d let him out to pee, and he never came back. That’s when the couple decided to sell and move. On the night they decided to move, the Calderwood moved in. It could be surprisingly lithe when it wanted to. It sent out its nimblest force first, thin and flexible, white bark to moonlight; then the crushers and the fallers, those that would swallow, the cavernous and the deep walkers. The couple never knew, not fully with their animal minds, that they were prey. They only felt the shadows increasing above them. Shadows rising in the pitch dark. The towering sound of appetite. And then it was upon them. 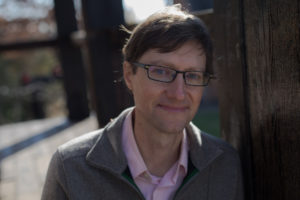 Jefferson Navicky is the author of The Book of Transparencies (forthcoming, KERNPUNKT Press) and The Paper Coast (Spuyten Duyvil). He works as the archivist for the Maine Women Writers Collection, teaches English at Southern Maine Community College, and lives in Freeport, Maine with his wife and puppy.