The Socyal is a neuro-network composed of over 7 billion individual organonodes, each capable of multifaceted (inter)action occurring within and across a range of indeterminate, non-fixed modalities, constantly parallaxing, to appear, at times, as steely receptacle, tumescent production source, and all matter of overlapping, contra-agreeing configurations.

The Socyal is an unprecedented and entirely unique way of commerce that offers both business and consumer – forever blurred and entangled – increasingly sophisticated means of pleasuring one another. Socyal enables both consumption and production – often occurring simultaneously, as if their perceptions had willed the other into matter(ing) – to occur at the speed and by mechanism of cognition. Socyal is a utopian, inclusive material-virtual framework that invites all manner of sentience to participate and flourish in an economy of abundance with a blind I towards (dis)ability, race, religion, and sexuality.

Socyal is an expanding, fibrous cloud of weaved sense-data. A compositional mash of image, text, mind-states, body-states, mindbody-states, sphinctal tugs, pulses, warm and cool spots, constantly eliciting a stream of affect that ranges from the susurrus of warm whispered ears, to the sudden stomach-sliding hypnic jerk, to the shimmering of the stellar imago and the humid, thickening distance between it and you(rs) and other innumerable and impossible composts of identities.

The Socyal is a hulking, gargantuan chunk of pink synthetic rubber, whose shadow, which would otherwise be all-encompassing and unbearably present, is made diffuse by a small nebula of wire, circuit, signal and MMI. It achieves its aims as any eraser would, through persistent friction and adhesion, on any surface that meets its touch, with a particular appetite for bodies. The rubbing, which at first feels like sandpaper dragged across the bottom of your thumbs, or the blistering of your heels in a pair of new white shoes, or the tapping of the tattoo needle over the same lines, slowly gives way to something else, something pleasurable, at first localized in your crotch, reminiscent of teenagers pawing at denim lumps, but then expanding the length and width of the body, until you’re sure that you desire the touch and, in fact, the touch desires you, so the friction continues, picking up little pieces of you, even the parts that you think you used to maybe kind of like.

The Socyal is a wrap of warm concealment, flowing and tightening between the thighs and beneath the pit of your arms, over and under all the crevices of the body, until it’s another blank slate, milky white (naturally, right?), awaiting inscription.

The Socyal is a thin sheet covering the I’s, a tacky veneer superimposed and only convincing in moments of self-indulgence, deceitfully disembodied, gazing down at your own moist little node in that big ole network. But it’s a cheap thrill, a parlor trick, the equivalent of strutting in your mother’s high heels or prancing in your father’s sport coat, the shoulders so comically wide and the look on your face grim and serious, just as his always was.

The Socyal is a police force free from the restraint of bureaucratic malaise, congressional oversight, and even entropy. Called into existence by the community but not by any deliberate design, only as some possibly emergent phenomenon, an accidental or contingent consequence of disparate and divergent processes.

The Socyal is a colossal, machinic apparatus of liberation, the caressing cogwheels powering the motor of infinite progress towards an as of now unimagined land beyond horizons, one free from the weight of the body and the reverberating pangs of solitary consciousness. The Socyal’s endpoint, where temporality disperses into dust, is a foregone conclusion; it is a path of undeniable and guaranteed progression, held up momentarily and pathetically by a few rogue yet necessary component parts: stubborn impedimenta.

The Socyal was supposed to be the stepping stone on which Tom Brady, of the New England Patriots, ascended from the levels of earth-bound fame (already, even after seven super-bowl wins, plagued by diminishing returns) to disembodied, quasi-omnipotent distributed sentience. It was – as all of the marketing materials claimed, as all of the sales teams ensured, as the staff of the Tom Brady – Bill Belichick – NE Patties Joint Cooperative Customer Outreach Committee agreed – the next logical step in attaining, well, whatever hazy, unarticulated, poorly-understood post-athletic ‘goal’ it was that Tom was after. Tom, by way of permanent consciousness extraction, was to be uploaded onto the Socyal, his supple, yet now obsolescent body cryogenically preserved and put on display at the Harvard Museum of Natural History. Following upload, Tom, or the diffuse, non-local, poly-sentient cloud formerly known as Tom Brady, was to provide users with a unique, completely immersive experience of Tom Brady, legendary athlete and masculine exemplar. With no network constraints on connection time, frequency of (inter)action, or content of simulation, the idea was that Tom Brady, or whatever one prefers to call the material base of TomCloud, would eventually be completely and thoroughly enmeshed with each node of the Socyal, shifting from a lowly sports celebrity to a pervasive, essential structural element of the known virtual universe…

but, that isn’t what happened…

Rather, some rogue elements – saboteurs, backwards glancing anarchists prone to fetishizing their own bodies – disrupted the process on the material side of things. The result was a temporary, yet profoundly disturbing experience impacting a significant number of users. Data provided by Socyal suggests the “incident” (as it has come to be known in industry circles) resulted in a twenty percent drop in continuous connections, a statistic almost instantaneously readable in falling market value. Due to the nature of the Socyal and TomCloud, no solitary user experience can be determined. The following account, which perhaps has some basis in reality is my creation; it is my own personal vision of the disturbance had I been the author of disruption.

You begin the big game the way you always do, as the Supreme Athlete, somewhere on the sideline, an indistinguishable red dot with a silver helmet resting on the tops of your thighs and your cleats digging at the grass. Your right arm, your throwing arm, looks to be missing, but it’s only pulled back through the sleeve, hidden beneath your jersey. Your hand claws its way over the topography of your chest, making its way towards your left breast, until your thumb and middle finger finally meet, separated by the pliable lump of your nipple. Slowly, you apply pressure until you can’t stand it anymore, give the thing a farewell twist, return to kneading the muscles of your chest, the way you do when you’re nervous. This is how coach finds you, with a hollowness in your gut, as if your bowels might just leave you, taking everything else with them. He tells you to get you’re shit together, you’re going in.  You don’t say shit, because what is there to say now? It’s too late. You pop the helmet on, trot out onto the field, contemplate vocalizing but decide against it in fear of what might come out. Somehow you manage to find your voice in the huddle but can’t remember the play you just called, can only think of the way the big fellas were looking at you, the way their eyes scraped their way through jersey and pad and flesh and saw for themselves what you really are.

As you line up under center, the stench of sweat and shit emanating relentlessly off the globular ass in front of you, you realize something’s wrong. It’s not nerves, pressure, the crowd, or the cameras. It’s something else. Something cosmic yet cellular, a realization that you’ve unwittingly entered some motion that cannot be halted and can only end in death. You’ve taken no amphetamines, but beneath cup and jockstrap you know with certainty that your cock has shriveled away into nothing, is in all likelihood now just matted hair and dust pressed into groin and thigh. You keep going anyways, position your hands beneath the man in front of you, the top of your middle finger picking up some condensation from the crack of his ass. For a moment, everything is silent, still, and there’s a brief respite from what you’re hoping is only a psychic disturbance; there appears to be a way out, some sliver of a doorway away from this mistaken life. But it isn’t real. As soon as the leather spheroid touches the tips of your fingers, it’s all so clear, so evident it’s almost comic. You begin your three step drop, but of course, your ankles are no longer functional, they’ve disintegrated beneath the weight of what remains of your body. The necrosis spreads quickly and from all angles. What used to be your calves, hamstrings, and quads course out the bottom of your pants in twin flows that have the consistency of moldy pudding and the color of Neapolitan ice cream. Simultaneously, the fibers of your forehead slip from your skull and cover your left eye, leaving you with a half field of vision and one all-encompassing red spot.  With the good eye, for the few moments that you remain in possession of it, you can see that your dentition has given up, broken rank, and finally fallen to the stinking puddle that used to be you. Obviously, the play was broken from the jump. The line has buckled almost as fast as your body, and you have a strong intuition that, even if you had a body in which to perform, your receiving corps is somewhere downfield, on their knees, being summarily executed. In the final moments, when your brain has finally bubbled into grey soup, and your helmet lay atop the slick, you find that you are somehow still conscious, aware of your own absence, and even as the game moves on without you, and the stadium clears, and the maintenance crew begin to hose down the puddle, don their rubber gloves, and argue over who will be the one to scoop you into a steel bucket, you can only think to yourself that this is somehow your own fault, that coach was right about you all along. 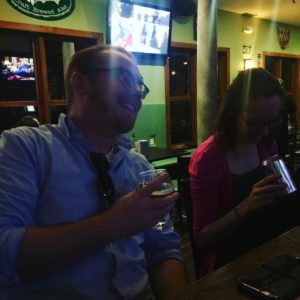 Andrew Boomhower is a writer from the Midwest who lives in Atlanta. His work has appeared in Maudlin House and Analecta.