Set the scene: it is perfectly normal.
A lovely party if we leave out the blackouts, the psychos
in love with the sound of their own voices.

Us poets talk about love. Side by side, the two of us—talking
about an exchange of power. A trade.
A grotesque ritual.

Or are we talking about writing? Grim gray electric IBMs
upstairs. In the study, real life methods
for psychic contact:

All the times I’ve talked about the simple, violent nature
of writing.

All the times I’ve talked about the dry and sterile exercise
of love.

Always hard work, beating the shit out of
the story, hypnotically aware of the thin thread
between nonsense and visions.

Trying to figure out what should happen next,
writing the word love over and over again without
the slightest

Let me sum up what I have: no cut throats.
No writing on the wall. The idea of writing
my own complicated and not particularly lovely gavotte.

About five years ago I got writing out of the picture entirely.
My two hands grasped the real world—a story with no monster,
no end, no pencil to bind me or slow me down.
Isn’t it a scream?

To deny the writing,

Real writers don’t exist
unless they are writing.

Pretend it’s a story. Third eye habit,
an exchange, a trade I don’t remember
making. The essential difference
between writing and non-writing.

The writing wants to steal your life, the poet said.

I’m not a bit sorry I couldn’t
stop it.

Source Material: The Dark Half by Stephen King, Viking Press, 1989.

Sleep-wasted, I shake out dusk. Evening is for solo-exploration, for lying
naked on the fresh made bed. My body is tinsel coat, my body is a blue
dress punched from sky. Pills make the archetype come easy: cherry Melatonin
mixed with Xanax, bitter blue. Swallow to turn inward. Swallow to skin-shrink like sealed flesh.
Sometimes I fall between the folds: my cerebellum
labyrinth. Sometimes I disappear entirely.
Down &

fruit fragrant. Cheek to pillow. Pillow to forest floor.
A peeling occurs. Who I am is the whittling—the collapse into cocoon-stasis.

Elsewhere, passed out
on the lumpy mattress, the cat swats at my visible tuft. My body buried in sheets,
my brain
buried under layers of hypnogogia. Life continues:
coffee pot bubbling, televised re-runs, a radio show
piped through distant speakers. Something seeps

in the interstitial: an NPR voice filtering into the dream stream, intoning
…feeling trapped…maze-like office buildings, fluorescent lit…almost a warren

There is water here. In it, my reflection is a hundred things collected under one name.

He got off on doing it.

Twenty-seven minutes and five chunks of flesh
the color of a conch shell’s outer edge.

It’s nothing.
An eye, some teeth,
silhouettes of a crewcut boy and a pony-tailed girl,
and a bunch of fingernails.

Over the bed: suffer through.
Flicking a bright circle—give me suction!—
of foreign tissue.

His hands: pressure and convulsion.
On the TV set: spousal training.

Shaven, a tinge of rose
malformed by touch. There is no mystery,
my eleven-year-old mass.

-I’m going to show you something

Source Material: The Dark Half by Stephen King, Viking Press, 1989. 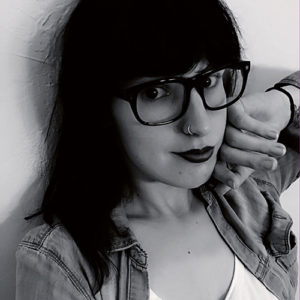 Kia Alice Groom is founding editor of Quaint Magazine. The recipient of an Academy of American Poets award, the runner-up for the 2014 Judith Wright Poetry Prize, and a pushcart nominee, Kia’s work has been published in Cordite, Going Down Swinging, The Australian Book Review, Westerly, Permafrost and others. Her work has been anthologized in the Hunter Anthology of Contemporary Australian Feminist Poetry and is forthcoming in various other collections. She divides her time between New Orleans, Louisiana and wherever she goes when she falls asleep.