He began, they say, walking sneakers on his feet. At a random corner in a lane, the city vanished behind him. He barged in to a wood, waded through thistles and marshes. The sky above remained seemingly frozen—blunt and bright. In the middle of it all, he grew younger, along the way picked up rags for clothes.

A wind-carved stone lies horizontally. It lies up on a nature-raised platform resting on the margins of a nature-raised circle, under an ageless fig tree, like a deceptive basic alien artifact, like an egg in what’s not quite a bowl.

‘Between the vessel and the stone what holds what?’

The bushes bustle with multitudes of dragonflies, their tails tied to yarns, and he goes:

‘Y’know I walk against the wind, and when I’m not busy eating these blackberries, the dragonflies direct me against which direction I must walk.’ And she:

‘You got those yarns from your rags or what?’

‘I made a hand-spinner out of a branch and a pebble. There’s a cotton tree over there,’ he points in no particular direction with his stained finger. ‘I’m good at catching and making things, I think.’

‘Mom would think you’re rather good at being compulsive and delinquent.’

And then she frees that one dragonfly, she wanted to believe was a fighter, from his grip.

‘No, no, no,’ he stutters. ‘It could get stuck someplace where you couldn’t do anything about it, y’know. But what’s that, a toy or what, around your neck?’

‘It’s called a cell phone, silly—mommy’s, I think. She hangs it on me, why, because then I’m easy to keep track of. She’s a bit forgetful.’

‘You mean a bit too forgetful, right?’

She hears under her nose a muffled beep indicating a dying battery anticipating regeneration. She plants the phone by a tulasi plant so as to reinvigorate it.

‘If my mom had one like that—oh! She must—I know she’d keep it as far away from me as possible. I dismantle things, she’d say, not always meaning to put them back together.’

Willy gets back home, having been to none knows where, this time after six days. His nephew who’s not surprised to see him thinks: now that he’s here I can’t scream so much, and shinks: ‘You gotta soul patch, dobeedo…so very dum dee dee dumb.’

‘You’re a good girl, but a bad boy, aren’t you, Matheyu?’ Willy wipes clean what’s a patch of grape off his chin. ‘You better call her, nutcase, even before that long overdue chinwag with your sister,’ says the shadow on the wall.

‘Yes, IT IS Vedda talking,’ insists the voice on the other end. ‘You must be mom’s colleague to know my (shriek) … I’m in a place that’s not on the google glocal … Don’t tell momma or ammumma about (shriek) … I see Vicky and Vedhalam suspended over the fast-fossilizing palm-leaf manuscripts … Someone so compulsive delinquent tied constrictor knots around … (shriek)’

He cuts the call and gets to the wall. ‘She let her niece talk to you every time she got overly playful. Now it’s every time she’s, what…pissed at you?’

The fact that Vedda inexplicably grows younger, like him and many others (setting aside those who grow older), during times of conflict goes over his head, a head that’s brimful of interpenetrating domestic thoughts.

You, not single anymore, are many pieces many more, he thinks.

He bathes and turns on the tee-vee, and as it goes from one white noise to the next, he finishes the last chapter of Arabian Noons, crawls to the bed and begins A Murder of Doves before dropping asleep after chapter none, page one. His shadow isn’t on the wall now.

Vedda and Willy cross the brook. From a banyan tree, hung to one of its roots like a flying fox, Vedhalam watches them. From the edge of the wood, Vicky watches Vedhalam watching them.

Touched by a dragonfly, Vedhalam stirs up from his frozen state.

Be at peace, you species, in one piece, shinks Vedda.

Beyond the starlit cityscape, far beyond the hoardings of cusses and promises, far, far beyond the hubbub of the living and the dying, in the pre-Vedic Uniprose, they say, down by the brook, is Vedda, alone—utterly unafraid yet startled often of the fictitious horrors of the wood, not particularly waiting for anyone or anything, untying those dragonflies (knotted intricately by the hundreds, fluttering stunted yet-to-be micro-drones, tied days ago by an adolescent Willy to the bushes that mark the wind-carved passageway) with silly chortles and chilly wisecracks. 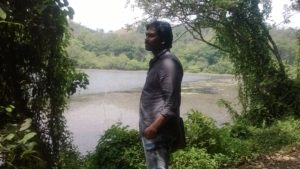 Ahimaz Rajessh has been published with Big Echo: Critical SF, formercactus, MoonPark Review, Jellyfish Review, unFold, The Cabinet of Heed, Speculative 66, Liminality, The Airgonaut, Occulum, Surreal Poetics, and Jersey Devil Press besides many other zines. He lives in an Indian-occupied Tamil Nadu.