English is Her Second Language

Mimi’s book on phonics has six different words: cat, hat, rat, mat, sat, fat. Her class is called ESL, which is called “English as a Second Language.” She doesn’t really know what it means, but her mother says it doesn’t matter. It’s education, and education is good, and they came here all the way from China for education, so be grateful and appreciate what we sacrificed for you, okay? All of that is said in Chinese, of course. Mimi’s last name is Zhang, but no one can pronounce it correctly. When it’s time for roll call, the others just yell “ching chong ching chong” when it’s Mimi’s turn to say “here.” (“Here” is so hard to pronounce, though, that Mimi says “present” instead, and the kids laugh. It’s not that funny.) It’s okay, though, because phonics is difficult. Sometimes, she doesn’t really understand it either. All the other kids in the third grade speak English at home, so they’re good at it, but she’s not.

Mimi likes math, which is easy to pronounce, except for the ending, the “th.” It’s like the rocks she stumbles upon when she’s running the obstacle course on the playground, the final hurdle that she just can’t cross. At the other end, all her classmates are jumping and waving, and crawling up the American flag and sliding back down again, and she’s back at what the other kids call the “Chopsticks,” this hamster wheel that you run on until the ends close in and you have to jump off. Mimi’s not so swell at that. She’s good at the running part though; she never seems to get tired. But then the sides start getting smaller, and then her foot gets caught. It’s just a game, they say, but not really. Mimi’s been in America long enough to know that there are two definitions to the word “game”: the kind you play, and the kind you hunt. They’re not the same.

Math is lovely, because it needs no translation. Sometimes word problems are more difficult, but as long as there’s a question at the end, everything can be solved. Numbers are the same in every country, just said differently–that’s the phonics of it. You say “one” in English, you say “yi” in Chinese, you say “un” in French. The way your vowels are formed is different. At night, Mimi practices this with her picture books: “Dog takes one apple. Cat takes two. Don’t take three, take four.” It’s almost like the way you curve your fingers over the piano; you cup your hand around a tennis ball and play. Mimi imagines words as apples, as tangible objects that her mouth can form around. Consonants are easy, but vowels are harder.

Mimi lives in Chinatown in San Francisco (it’s hard to pronounce), and she doesn’t really know what everyone’s saying all the time (it’s Cantonese, her mother chides, as if Mimi would know what that means), but she knows the faces. They’re yellow, like her, and they eat rice and talk about being ih-muh-grunts or something like that. Some of them volunteer at Angel Island, just across in Tiburon. When they come back, they don’t seem very happy, but Mimi never asks why. They look at her, clutching her Ivy Ling American Girl doll, eying the glossy black hair, the unblinking brown eyes. Then they shake their heads, and pat her on the shoulder without saying anything. After they leave, Mimi just stares as they head to their respective apartments, the neon lights in Chinese flickering up ahead before diminishing completely.

They don’t make a sound.

Ivy Ling had first come to the Cheng home in May of twenty-thirteen. It arrived on the front doorstep packaged in a neat cardboard box, arrays of bubble wrap being shoved in the empty parts. Her hair was black, and she was wearing a red qipao. Her eyes were closed.

They’d gotten Ivy for a considerably lesser price than the other American girls had cost: ninety ninety-nine. At first, Mimi had attributed it to the whole “Best Friend” status, but then her mother pointed out that Ruthie Smithens, Kit Kittredge’s Best Friend, was still one hundred twenty. So were Emily Bennett, and Elizabeth Cole, and Nellie O’Malley.

“It’s because they’re all American,” her mother had sniffed, “and Ivy Ling isn’t.”

Mimi had shrugged. It was a doll, and her classmates had dolls. She brought it to school the next day, and her classmates had looked at Ivy, then back at Mimi, as if trying to compare the two. It wasn’t until later, that one of the boys in class pointed out that its eyes were slanted and that its skin was yellow that she realized something was wrong. Next to the Tinker Bells, the Barbies, and the Buzz Lightyears, the yellowness stood out.

It is Lunar New Year, but Mimi still has to go to school. She whines, scrunching her nose up the ugly way, and pouts. Her mother scowls. “Ai-ya, how you gonna get husband that way?” She puts Mimi’s hair up in buns, the same kind she sees in her United States History textbooks. There are people stabbing at the buns in sticks. Hopefully, though, that doesn’t happen to her. Americans must be kinder than that.

Word problems start being introduced in class that day, and they’re by far the hardest part of math, because the thing is that Mimi doesn’t know why Julia has seven apples, or how Ben is driving sixty miles per hour. Who gave her the seven apples? What type of car was it? Other people seem to get it, but she doesn’t. She raises her hand, and the teacher comes over to help her, but not before saying, “I thought Asians were supposed to be good at math.” Ms. Miller gives Mimi a conspiratorial wink, as if they’re both in on a secret. Mimi doesn’t know what that secret is. It’s so hard to understand sometimes.

How do you say Asian? A-sian. So that means A’s, but there are more letters to the alphabet than that. It’s a problem she can’t solve.

Mimi thinks, makes up her own word problem: there are seventeen students in math class. Sixteen of them have blue eyes. One has brown eyes. If you subtract the one with brown eyes from the seventeen, how many are left? It should be an easy problem, but it’s not. You also have to count the eyes.

When Mimi went back to Beijing last summer, the language felt fuzzy to her, was heavy on her tongue. When her grandparents asked her how the food was, she tried to say that it was terrible, there was barely any rice. The words, when they came out, sounded muffled to her ears. The phonetics were all wrong. Her grandparents smiled and nodded and pretended to understand because back when Mimi lived in Beijing, she’d been the smartest girl around. All the boys were jealous because her name was always there, ranked first. Back then, she hadn’t been just Mimi Ching Chong Ching Chong. She was Zhang Mei-ying, with beautiful in the middle and silver in the last syllable. Whenever she pronounced her name, she made sure that her tongue was suck to the back of her front teeth. It sounded more intelligent that way.

But when she came back after living in America for so long, there was a language barrier–thin, but still there. Her grandparents chattered and laughed and ate their noodles, reached over for the fish. Whenever Mimi listened to them, she could practically taste her native language, but it only lingered before it was gone completely. When her grandmother spoke about the time at the market when Mrs. Pao had bumped into her, knocking her pork sauce and bok choy right out of her hands, Mimi wanted to say that Mrs. Pao had always been that way. The pingyin–English spelling–was there, but not the tones. It sounded like gibberish. Her grandparents smiled and nodded, but behind their eyes she could just see the disappointment.

When Mimi arrived back to the flat in Chinatown, there was this sense that she wasn’t really Chinese. There were so many stories to tell, and she didn’t even know how to say them. She tried, she really did. She just couldn’t get the sounds right.

She’d liked the sound of America before she’d come. When she read about the United States in her World History textbook, it’d seemed like such a great place. All those smiling white people, a good education.

It wasn’t until later that she realized: sometimes, the letters that make up a word have different sounds individually, but combined they’re all the same. If they’re combined, there’s only one way to pronounce them. That way wasn’t the way she thought it was.

Home is a funny concept. In Chinese, home is jia. Open mouth, freedom. When you say home in English, your mouth forms a smaller “o” shape. It’s easy getting mixed up in all the phonics of it. It’s just like running the hamster wheel, when the ends close in and you have to jump off. The sides are too small. Freedom gets caught.

Sometimes she can’t even think back to why she came to this country at all. Other times, she does. Mimi came for the sounds: liberty, equality, democracy. She came for the sound: America, home of the free and land of the brave. America. America.

When she says the word, it feels bitter around the edges. 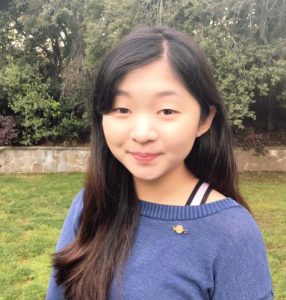 is a Chinese-American writer and activist currently attending Presentation High School in San Jose, California. Her writing has been featured by The Huffington Post, Los Angeles Times Insider, and We Are Three Dimensional, and she serves as an International Goodwill Ambassador for Postcards for Peace, a UK-based charity aiming to raise awareness of global social issues. Find her on Twitter @valerie_wu.