At a Bar in Texas

At a bar in Texas, Carson poured Dane his seventh beer. He’d finally noticed her new braces and was writing something on a napkin. The rest of the barstools were empty. Afternoon sunbeams exposed the tears stretched across their black upholstery, covered intermittently by patches of peeling duct tape. Dane’s pen halted above the napkin.

“The tender’s teeth were caged,” he said. “Like dogs in dog pounds, or people in prison.”

Carson shook her head. “Fuckin’ poetry, dude.” The words felt tinny coming out of her mouth, the metal clouding her speech in a lispy fog. She watched the craftsman hammer away in the corner. His tables had come cheap, with the condition that he had to make them at the scene of their installation. He finished the first table and stood to examine it, then nodded with satisfaction and made his way to the door. “Hey,” Carson called. “You taking a break?”

The craftsman rubbed his bulging stomach. “I make one a day,” he said.

The craftsman pushed the door open. “One a day, sister!”

Carson picked up the phone and called the owner, Helen, who was chewing something with a tired stick to it, the sound of it like a slow saliva carwash.

“I guess he’s tabling the project for now,” Helen laughed and wheezed and cleared her throat vigorously. “Don’t worry, darlin’. People ain’t there for the tables.”

“Yeah,” Carson said. “Our chairs have always been the draw.”

Dane twirled his pen around in the air and looked at the wall.

“At a bar in Texas,” he said, “she told the world a joke that it would never understand.”

Carson lived in a small house near the interstate, isolated save for a few cactuses and an abandoned auto-shop down the street. When she got home, Adam was playing a video game on the couch. There was no sound and the TV was blank. She squinted at it.

“Am I missing something?”

Adam’s eyes didn’t move from the screen. His fingers tapped and pressed on the controller. “It’s new,” he said. “Something’s supposed to show up once you play it long enough.”

Carson shook off her jacket. “Unless it’s immortality, this is dumb.”

“What if it’s a cure for cancer? Would that be dumb?”

Carson got onto the couch and straddled him, leaning in to nuzzle her nose in his hair.

Carson went to the kitchen. She hit the light switch and then remembered that the bulb had burned out. In the dark she found a bag of chips and leaned against the counter. She watched the back of Adam’s head and listened to the erratic click-clack of his fingers. The sound mingled with her chewing, pieces of chip getting stuck within crevices of metal. Before she knew it, the bag was empty.

The next day, the craftsman entered the bar in his underwear and went to work on the second table. Carson and Dane started laughing.

“It’s not funny,” The craftsman gave them a stern look, stomach spilling over his waist. “That witch took my clothes.”

The craftsman pointed out the window. In the dirt lot outside the bar there stood a woman dressed in faded patches of purple and black, rumpled blue overalls in her hands. She was staring at them.

Carson pocketed her rag and made for the door.

“At a bar in Texas,” Dane said, “she confronted the witch with the craftsman’s clothes.”

“My name is Rob,” said the craftsman.

Outside, Carson approached the witch and crossed her arms. The witch’s hair was a pale blonde, spiked at scattered points along her head. Her skin was yellowed and weathered past her cheeks, as if the front of her face was newer to the world than the rest.

“So what’s this about then?” Carson asked.

The witch spit on the ground, inches from Carson’s foot. “It’s about that man in there,” she said. “I don’t like him doin what he’s doin.”

“Why’d you take his clothes?”

“Slow him down,” said the witch. “Make him feel bare as the rest of us.”

Carson looked past her at the expanse of desert. She could see a tiny figure digging into the ground far away, flinging dirt to the side.

“Fine,” said the witch. “You’ll see. He’ll be the death of us.” She shoved the overalls into Carson’s chest and turned to go. Some of the dirt in the air had made its way to them and it obscured her image as she trudged across the desert, huddled into herself. The light seemed to travel with her and Carson was left standing in shadow, tense from the chill of the sun’s departure. She watched the distant digger take a step inside the hole and stand there for a moment before lowering themself to a sitting position, concealing their form completely.

That night, Adam was on the carpet in front of the TV, eyes stuck to the nothing on screen. The circles under his eyes had deepened, one of them accompanied by a line of black runoff, as if bleeding fatigue. Carson lay down on the couch and looked up at the ceiling. She wondered if her existence was moving forward any more than his, if what each of them did that day was interchangeable in the grand scheme of things. At least Adam had a goal in mind, an end-point, a light at the end of his sitting and staring.

She looked over at the back of his head.

“You think straight teeth are important?” She asked.

She thought of the night they’d met. Two years ago, both of them twenty-four. They’d shared a cigarette outside the convenience store and talked about the places that they wanted to see and the charms of cheap pizza. They made a plan to sample the shittiest pizzas that the world had to offer. Carson found that there were some people you could just fall into, and Adam was one of these people for her. She fell into him and laughed with all of her crooked teeth. Adam smiled, said her laugh was like a lemur set loose in the room.

“One that used to be boring.”

After a while Carson rose from the couch and went to the door, throwing on her army jacket. She walked along the cracked pavement that led to the interstate and stopped behind the dented divider to smoke a cigarette. Headlights threw an amber glow onto her face, intensifying before fading into black. She heard footsteps beside her and turned to find the craftsman approaching with his toolbox. Carson had been coming here for years and no one had interrupted her before.

“What are you doing here?”

The craftsman pointed to the dent in the divider. “I was summoned,” he said. “What are you doing here?” He set down his toolbox and kicked in the divider, then knelt and wiped off the smudge left by his shoe. Standing back to examine it, he nodded with satisfaction and picked up his toolbox. Together they watched the cars beam past, a never-ending current of anonymous life.

“You ever try hitchhiking?” Carson asked.

“I’ve done it all, sister.” The craftsman’s tone was almost friendly. After a moment he left her side and plodded down the road’s shoulder, drifting in and out of shadow as the lights slipped by.
Carson put out her cigarette and leaned over the undented divider. Her hair swung forward and dangled in her peripheral vision. She was eighteen the first time she’d come to this spot. She’d stuck out her thumb and waited until a semi pulled over to the side of the road. The sound of its big passenger door sliding open had been electrifying, a boot to the face of all the doubt and worry. Carson rushed forward, beaming as if about to be pulled up from a cliff she’d been dangling on her whole life. But when she got to the cab she found the seats empty, keys gone from the ignition. She scanned the road to see if the driver had gotten out. There was no one. She knelt down and peered beneath the cargo bed, went around to the back and knocked against the hatch. Nothing. Finally she climbed inside and sat dormant in the driver’s seat, waiting. When morning came, she got out and walked home.

The wind picked up and Carson wrapped herself tight inside her army jacket. She closed her eyes and imagined she was back in the semi. She saw her foot pushing down on the gas, the compression of unbreathed air between pedal and floor.

The next day, Carson got to the bar at four and waited for Dane’s inevitable appearance. He always came straight from his shift at the gas station a mile down the road and he never smelled great, but after so long Carson found the scent pleasantly familiar. She ran a rag over the two tables and wandered into the back. The old tables were stacked on top of each other, an orgy of splintered pine, customer initials scrawled on every inch. From the corner she heard the hollow mumble of cardboard shifting position and went over to find the witch sleeping behind a semicircle of boxes. Carson moved them aside and shook the witch gently.

The witch opened one eye and pointed to the closed one. “Here there’s everything.” She moved her finger over to the other. “And here there’s the musty back room of a shithole.” She curled away.

Carson paused, then shook her again.

“Get my braces off?”

The witch dragged a hand up and snapped her fingers. “Presto,” she muttered. “Now piss off.”

Carson ran her tongue over the jagged edges of her teeth, the nooks and crannies of their misalignment. She smiled and bit down. Clack. Teeth liberated. She stood and looked around the room. It was empty and cold; the witch had picked a lonely place to sleep and her dreams would be none the better for it. Carson found a dust-coated blanket and threw it over her, then replaced the boxes and left the room. At the bar Dane sat waiting. He waved to her and Carson poured him a beer. More customers came in and filled up the two tables. Others followed and sat on the floor. Dane told a joke about bigfoot in Texas and Carson laughed and someone whooped in the corner as a couple kissed. The craftsman didn’t come.

When Carson got home, Adam was gone. She searched all the rooms. His clothes were gone. His toothbrush was gone. The little pool of muck below his toothbrush was gone. His presence had been wiped from the house like a smudge. In the living room, the controller lay on the floor at the foot of the TV. Carson picked it up and pressed the start button. She stood in the quiet dark and watched the blank screen. Had she paused the game, or un-paused it? There was no way of knowing. She stayed there, breathing softly, until she heard the low roar of a semi-truck approaching outside, coming to a stop in front of the house. 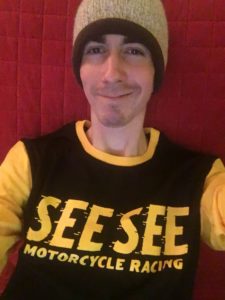 Timothy Day poses as an adult in Portland, Oregon, where he is pursuing an MFA in fiction at Portland State University. Links to his other stories are here: https://frogsmirkles.wordpress.com/published-stories/