“Gold once out of the earth is no more due unto it; what was unreasonably committed to the ground, is reasonably resumed from it; let monuments and rich fabricks, not riches, adorn men’s ashes. The commerce of the living is not to be transferred unto the dead; it is not injustice to take that which none complains to lose, and no man is wronged where no man is possessor.”
-Sir Thomas Browne, Hydriotaphia, Urn Burial, or, a Discourse of the Sepulchral Urns lately found in Norfolk (1658)

“It’s so important to be really true to yourself in design, and I am.”
-Thom Browne

I have a beach in mind.

My bird bones, my red phosphorous isn’t renewing so well. My beach body emerges from the
sand and the focus should be the limbs. Decadence is not the whole. My quicklime body. The
way it goes pop. And greens. Flaring.

Green is all the rage.

I volunteered to clean up a local beach, to clean up the garbage. I had to wear an orange vest, like
a criminal. I wore orange like an American president.

The beachgoers today are hard to look at. Not enough flame. The girl with the white hat? Her
face is waiting to come to life, but Seurat only paints corpses.

Under a bridge, a red plastic pom-pom protrudes from thick mud. I try reaching it with a trash
picker, but the pom-pom is strangely too heavy. I have to use my hands. I worry something
might be attached to the pom-pom. Will it be a cheerleader or will it be Mickey?

Oh, Mickey. What a pity. You don’t understand. And you’ll never understand.

I think about Blade Runner’s scene with the ostrich wearing the Minnie Mouse bow. Blink and
you could miss it.

A T-shirt at the gym reads, “Real men don’t blink.” I find out later he was a camera all along.

I shove the red plastic pom-pom into my black garbage bag. Mickey, you phony, you heel. I
swear I can hear “Superstar” by The Carpenters playing in a department store dressing room.

Poe-eyed, I am purloined by the beach. Lying in the toxic sun. Sinking in the dunes. Silence. A
boy wearing cowboy boots too large for his feet approaches. He pours a foundation, then
sandcastles. A stylish cockier spaniel tramples me. The boy loses his vision. Silenced.

“But do trees have sex,” asks a little girl. “Don’t talk that way,” says her father. The little girl
thought sex was when you hugged an object really tightly. She would grow up to be a holy
whore, ever-incomprehensible. Stupid fathers.

My bus driver tells me he hates my yellow chin. He says my limp wrists give him anxiety. I slip
on a banana peel.

The women on the boardwalk look like they’re having trouble walking. This season’s catalog
looks like it’s on fire. And the girl in the white hat? Her face is smeared white with banana, too.

The models on the runway were never trying to sell what they were wearing. The spectators
didn’t understand what participatory control meant. The models held up mirrors to the picnic
grounds and the picnic grounds went up in flames. Thank god.

It’s like old witches say: When up in flames? Thank god.

A TV reporter on the boardwalk walks in circles. Women have been streaking on the beach
again. The circles grow wider and wider. Too many rosary beads, not enough fucking.

Next, I pull a twisted suit from the ground. There’s a tie, too. What a strange word for a ribbon. I
put the suit in the bag, it smells like rat shit. My dandelioned chin glows. My orange vest glows.
I shove a slashed beach ball into my garbage bag. The sounds of geese hissing.

A few men stand staring on the charred boardwalk. On the runway. They stare at a mermaid. The
sexually mature mermaid sings a song about parts, limbs, wholes, but no one understands her
mermaid-language. Everybody knows there’s nothing more dangerous than a language you can’t
understand. A police officer is called to the scene and the mermaid is never seen again.

Police officers have a habit of making things disappear.

Denatured in a canister on daddy’s hardware store shelf. Not enough flame.

A boy finds human brains all rolled up in sand. Mistakes the brains for funnel cake. He eats the
brains. He was hungry after all. He was abandoned by his family. All-American family, always
hungry for another crime scene. He escaped a conversion therapy camp. He knows all the words
to “High by the Beach.” He is thirteen years old and super hungry.

“Betcha on land, they understand. Bet they don’t reprimand their daughters. Bright young
women. Sick of swimmin’. Ready to stand.”

Oh look. Look at the stars tonight. Those old commodities. 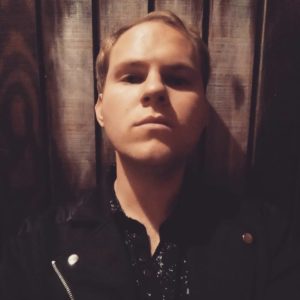 Paul Cunningham lives in Athens, Georgia. He has translated two chapbooks by Sara Tuss Efrik: Automanias: Selected Poems (Goodmorning Menagerie, 2016) and The Night’s Belly (Toad Press, 2016). His translation of Helena Österlund’s Words is forthcoming from OOMPH! Press in 2019. With Jake Syersak, he co-manages a micropress called Radioactive Cloud. His own original poetry has appeared or is forthcoming in Ghost Proposal, Spoon River Poetry Review, The Spectacle, OmniVerse, 7×7.la, Yalobusha Review, and others. You can read more of his work [here]