A poet’s job is not to tell a story, I once wrote.  Not meaning to offend anyone in particular but to point out that a specific poem’s only accomplishment was that it told a story. I like musicality and verve of language in a poem, not cut and dry, get-to-the-point and tell a narrative. That doesn’t cleanse the orchard of its romantics. The bustling nature of artifice clings tightly to its bound surface. Not having arisen from a head that felt asleep for days, I now lash about with an unwillingness to properly grasp the word around its meaning. To cup it, as though it is a sieve, to cut it, as though a piece of paper, the nettling head that I am bound to feels craggy and every specific word is an effort. I don’t see an essay written by me to even skim the surface of entertainment. Not purposefully approaching something with an inverse effort necessarily but acting upon my most realized nature to not enact meaning. Something shared with the wilderness, or encapsulated in an edgy locomotive corrupted corporal abandonment, induced with a powerful engine and smashing mainframe.

I’ve stepped aside to let the wicker that was left out in the rain dry off. I’ve boggled identity with enthusiastically placed song. Moments right between a closing act, I heard a tune that didn’t even exist. Nearly every night in bed I claim to hear helicopters and sirens even when they’re not there. To clam up because the illusion is heightened by the cityscape sounds drilling into our heads. Where silence is most necessary it is not. I want to hear the nothingness. Even a noise machine doesn’t cancel out the existence of silence somewhere deep in a faraway forest.

As humans, we can’t play our vocabulary correctly if we can’t heal.

Most my life feels like same concepts different narrative. But if you flip the poem around there is loosely a narrative that’s always the same.  The sum of frustrations, of avoiding intimacy, the root of the storm loosely shifts to a fault. In fact, there is no clear storyline. No plot-driven ego. If a machine rides itself, why do we rely on a driver? The poem can be the epitome of language meeting itself in full-planetary circle. I used to take bong hits in the middle of a field. And once completely stoned, only then did I realize that the earth is actually a circle.  Before I knew it, only because science says so, but I didn’t truly believe, rather I felt the flatness everywhere, and only the eye’s ability to see, can something then drop off an edge. An edge is a breaking point. A shift from micro to macro. In the story I saw the romantic couple, having just survived a duel, gallop away into a horizon. Shakespeare’s narratives are said to take two diverging pathways: a tragedy often ends with death, and a comedy with marriage.

Now because my tendency is to skip around, quickly from one subject to the next, I never fully play out the scene, to a fault. I am sorry. I’m going to work really hard to now break down some of what has already been displayed up above ^.

* Most my life feels like same concepts different narratives: I think I did a pretty good job of making a sentence right afterwards that talks about how my poetry reenacts itself but there seems to be something concrete missing. Here’s a line from one of my poems that kinda sums this up: “I felt my whole life nothing would come of anything / word horse and trailer pulling route to explore the nature of broken things” (from xiv. in Last Difficult Gardens, chapbook published 2013, Horse Less Press)

I think about this often because I feel dragged around by language, and also set up for failure, the frustration to clearly communicate lands me on a lower spectrum in a capitalist society. Because I’m an emotional being, and can only live as an artist because everything else I try to do feels falsified and there’s no way I can fraudulently exist; the world isn’t conditioned for this type of human specimen; therefore I am going to fail. I’m already a failure just by existing as a female artist. Because I don’t want children, my existence is even less valued and understood.  Often people can’t relate to having a female body that doesn’t want to give birth. You are shamed, and this makes me feel like damaged goods. Anyhow, that’s what a lot of my poems are about. And this is all the same thing. Being pulled around by language, being an artist, a female one, and not wanting children, all linked to failure.  Therefore the concepts are mostly the same, and play themselves out in varied, loosely splayed narratives.

* The poem can be the epitome of language meeting itself in full-planetary circle. I think a poem is the best possible way for language to have all its sides revealed. You can use the forth dictionary definition of a word in a poem where it can also contain the meaning of the first definition. You can push the word to its soundscape where it bleeds and blathers in a hyperbolic measure. You can frame it within something unexpected, not just by juxtaposing words that often don’t lie within proximity to one another but rather by filling an arcane space within a more modern field. You can tell a lie, and make it sound so sweet and pretty, to quote myself, “the moon doesn’t exist.” You can celebrate, and sicken, you can readily acknowledge a political subject then switch into a theme about pop-culture and velvet shoes. You can make a master die, in order to make a new theory sing. You can fill a valley with sheep, empty it of sheep, fill it with water, make the aqueduct bereft of human life and give back to the soil. Where we fall off the poem, we fall off the globe, into the best atmospheric heightened starryscape. It’s okay to be grandiose, pump up languages veins with erythropoietin. 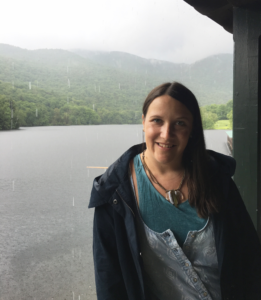 Paige Taggart is the author of two full-length poetry collections, Or Replica (Brooklyn Arts Press, Dec 2014) and Want for Lion (Trembling Pillow Press, March 2014) and 5 chapbooks, most recently I am Writing To You From Another Country; Translations of Henri Michaux (Greying Ghost Press). She is a designer and maker of jewelry and runs a small business, Mactaggart Jewelry.