for every animal on land

its counterpart at sea

their world known only

by folklore and tale

in every uncharted expanse

a horse with the tail of a serpent

a spinney whale of two spouts

while Poseidon plays his lute

and gods wrestle each other

what is unknown a threat

tales to tell of tails

your happiness promoted by spleen and humors

lay back and let us leech

how different this then

from yours dear Wolf

to test for magic and spell

what is unknown a monster.

A friend texts asking what sort of stereo system I have. He wants me to watch his receiver and JBLs while he’s in Korea. He has been going to Korea for months now, always next week. Every week he texts to give me something new and every week we have another going away party for him like the dying. He has been going to Korea for 183 weeks now and every week it’s always the next. His passport/visa has been delayed, housing complicated. I think he collects things to give away and has no plans of ever leaving. I have rooms full of his things and have rented a small 6×9 unit in the U-STORE for his glassware, 99-cent icon candles, and patterned socks collection. I am too old to collect vinyl or cultivate new interests. I have second thoughts about taking on his load. In this week’s boxes, it’s mostly old shoes, but there is a tiny, living ebony elephant –not a metaphorical one – but a breathing thing glistening in its own shit in the crumbled newspapers. The elephant, I’ve taken to calling him Commandant Lassard, blows dusty snot bubbles and whine out of its trunk like the pinched-mouth of a balloon. It insists on doing all the cooking, stomping as loudly as it can with its dumb tiny feet, which is not very loud at all.

the way a crowd

you a body limp

can be so whole

a stage full of bones

I remember when I was a kid

every other week some kid fell into a well.

My childhood’s greatest threat was an earthen maw

with stone teeth yawning to darkness

where at the bottom, a pit gut hungry for children –

lived boys and girls that looked just like me.

They would lower food to us, radios, and tiny mirrors

to flash back up so we could communicate by light.

I grew up in Los Angeles and had never even seen a well.

I have no idea why wells love children or

why so much has vanished.

When you arrived we knew

you were unlike the others:

a strange matte, full of burs.

I took you to my breast,

fed you with the others,

let you play rough with the others

but intervened when too rough.

How you came naked and still,

You had no taste for the blood

of fish, huckleberry, ants and wasps.

You are not growing, skin

I will weep for you as my own. 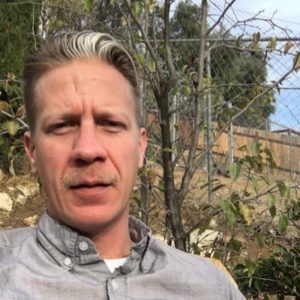 Nik De Dominic is the author of Your Daily Horoscope from New Michigan Press. Recent work has appeared in Guernica, Los Angeles Review, Diagram, and elsewhere. He edits poetry for the New Orleans Review and The Offending Adam. He teaches writing at the University of Southern California and lives in Los Angeles.