The Knitting Needle and the Grandfather of all Weapons

(The needle and the staff knit flocks of heresies, practicing separate yet complementary graces)

a quest: anyone
can engineer a cocoon
with the considered
accumulation of generations

a quest: you who
are not worthy beware
of the work

a quest: trapped here
in my lungs is a
proclivity for cycles
circles that matchmake
sickles, sickly eagles
eugenics ain’t a game
kiddies

a quest: i haven’t got
my period in months
so i’ll practice this
birth in place of
self-replacement
thanks

a quest: my grandmother
could have taught
me both if she had
been in the practice of
remembering how to live

a quest: both are a
concrete refuge from
the dinner table

a quest: i elect one to
stand in the place of
a parliament’s lacy absences
a constitution’s
fair isles cradling erosion

a quest: greatness in the
working and the studied
cascade of repeating
sibilant

I take my life into my
teeth each time I cross the street
scruffwise, gruffly, taught this
way by old tigers
whose lessons translate
to the circuitry of the city’s night
with surprising electricity

It is no matter whether
their target was a tyrant
red cascades regardless
resigned to its prosperity shingling
the roofs of traitors made poor
by their slaughter of the myth
the goat given anew to
confections and the warmth of old consumption
in lighted windows, the loins of the country
the groin of the State 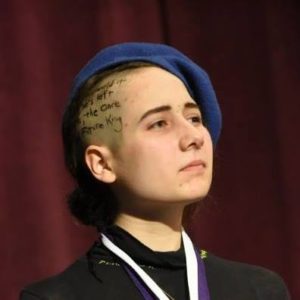 Marion Deal chases ghosts across the globe: to the mountains of China as a student of kung fu, to Paris to commiserate with what remains of Jim Morrison, soon to a monastery in Nepal and the University of Rochester to unite academia and Buddhist thought in research on the nature of the conscious self.  Her poems have appeared or are forthcoming in literary journals such as The Rumpus, Gravel, Rougarou, Apricity Press, The Offbeat, and elsewhere and have been nationally recognized by the Alliance for Young Artists and Writers and the National YoungArts Foundation.