Home to some of the tallest peaks in the world, the “Yugans” were born through the trauma of megathrust & glaciation.

Sometimes you don’t know a thing is hurting you while it is happening—the scars only become visible once it has moved on. Corrugations from the glacier’s retreat can be seen from space; so, too, can the war trenches that swell welt-like on the vale.

How much can a body withstand? The higher you go, the more resistant the rock. Argillite. Limestone. Too stubborn to be worn down.

There is a hill station at the eastern edge of the protectorate, of some small renown for the brewing of local grains. It is a day’s drive up the mountain road, sans guardrail or shoulder, one side forest, one side sky. The smell of freshly harvested shallots rises from small mounds on the roadside. It could be paradise—

& for all that, no one really wanted you; just a way through you. Armies & trade. Armies & trade. There is a proverb from the Book of Shaassen: “Shohonay guard the gate; water & want will have their way” (Shn 12:8).

Near a teahouse sits a great & sorrowful cirque, a giant bite mark gouged in the emerald valley. For an absurd fee, you can shoot a volley of bullets from an AK-47, & listen to the echo off the cirque walls. The trigger is so eager, the takers young. Drunk. Male.

Range of the Vanishing Path

No wonder the city of X has a vexed relationship with the mountains, known locally as the Paachas, or “Worlds.” Legend has it a sleeping child tied to her mother’s back woke as they summited a nearby crest & cried, “Mother, look at the world!” (Maatue, paacha ta rubaake).

A small church sits at the top of the legendary peak, renamed for Saint Araño, whose giant statue looks down on the city, palms open to send blessings in one direction only— for it is also an interdiction: Ascend further & you forego salvation.

This is the law of stratigraphy: To look down is to see the past. What can we know of the ancient veins—frozen, profane—buried beneath younger rock? For the church, it is canon; without memory, there can be no sin, & no atonement. The jungle is heretical; it erases its own past. Shrugs the work of hands.

Mt. Araño is an important pilgrimage site for the people of X. They come to look down on the red-roofed city, like the saint before them. But there are always those with their backs to the view, eyes fixed on the wet & untrod slopes that tower above the whitewashed sanctuary. Citizen K, native son & revolutionary, once said, “I would rather feel the heavy arms of the Paachas wrapped around me as I kneel in their shadow, than stand on their shoulders to look down at where I have been.”

(No path awaits us.
Our prints will not remain). 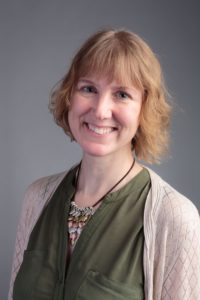 Laura Ring is a poet, short story writer, anthropologist, and librarian. Her work has appeared in RHINO, Stirring, Rogue Agent, and Sonic Boom, among other places. A native Vermonter, she lives in Chicago.