have you been able to locate who i am in the time it has taken to get here? your memory leaves its marks. but the rest of the body has to believe something about you in the world. try: the patriarchy is a fungus that has no mother, or patriarchy is a microfungus that has a horrible mother. here’s where we need a cheat sheet for a takedown on principle, our strategies for the win of what’s left of this world. maybe compersion combined with omniscience is the ideal of the limited narratives we collect sometimes (note as possibly helpful- you gave me that idea!!!). i have observed the behavior of infants nuzzling into their mother’s necks and have thought: anyone can do that, and anyone can say “it’s ok”, into the many very close ears

in the midst of what’s mostly a monarchy, my mom said:

myth and method are not mutually exclusive. one might

make itself clearer as if you were mishearing something

but instead you can hear through a thing and you can

(this is method) and mine for meanings. you might ask

well, it’s multiple- i am ready with my reply. the other

(myth) is manifest in the warnings we send ourselves

for instance a gold transport of glimmering

over a surface that we previously thought had depth

what part of your process of forgiveness is traumatic for people living halfway across the world? a piece of space is easily occupied by a shape, so carefully bend your conversation into a river entering the media where limp statements are quickly consumed. a kangaroo peeks into a man’s pants and exclaims, “oh no! i think your child is dead!” it’s the same with media, actually. i often feel like poetry is the least truly shared thing but i mean poems. poetry, actually, is everywhere and entering us like insomnia all the time, only sometimes as poems. but here we are. are you here, too? 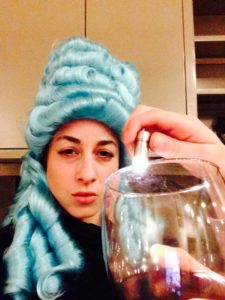 Laura Goldstein‘s first collection of poetry, loaded arc, was released by Trembling Pillow Press in 2013 and her second collection, awesome camera was published by Make Now Press in 2014. She has also published several chapbooks with vibrant small presses across the country. She teaches critical thinking and writing, literature and poetry workshops at Loyola University and is the co-curator of the Red Rover Reading Series in Chicago