The first persimmon tree grew adjacent to a storage facility, in the front yard of a house she shared with a roommate who showed her how to freeze persimmons, then thaw and eat them. The flesh of the fruit would soften, its flavor deepen. We should bake persimmon bread, she said, but they never did.

The second and last persimmon tree grew just outside her bedroom window, in the neighbor’s backyard. She never picked its fruit, although she lived through several harvests there. She became familiar with the desiccated caps of flowers left on its branches in winter like brown paper bows. Later she would learn how to predict winter weather patterns by reading the shapes of persimmon seeds:

Some autumn days she’d notice the long wooden handle of a fruit picker’s rake bobbing up and down above the neighbor’s wall, clutching its amber fruit and lowering it to the ground, into a basket, she imagined.

In the early morning she’d wake to the noise of green parrots in the tree. She began to recognize their squawking, and could soon identify the birds without seeing them. They’d gymnasticize on the branches, swinging upside down, turning their bodies around their necks like wrenches to reach the hanging, unripe fruit.

They ate so many young persimmons, those parrots. They blended in with the leaves so well, they hardly showed up in pictures. If she sent someone a picture they wouldn’t see the parrots. She would have to describe them. She attached undue significance to these descriptions.

It was during this period that she got involved with an ornithologist who sent her letters about meteorology, and compared her voice to the cries of exotic birds. She sent him a postcard that read:

When you forget about me it will be to the

sound of a company of feral parrots at 5am

So they moved into a house by a peach tree. The peaches seemed never to ripen until one day they fell, bruised, to the ground, and grew soft with mold. There were no parrots, but there were many hummingbirds. Some birds are so small their hearts are the size of dried persimmon seeds, he told her.

Once in a while she’d look out at the peach tree and see them sitting, hushed, on thin branches. She’d never seen hummingbirds sit so still before. 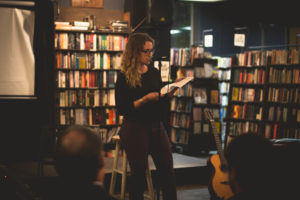 ginger buswell has served as editor at harlequin creature, molossus, and the Los Angeles Review of Books. she and deenah vollmer host alias readings & music, a fundraising series in los angeles. she co-found(er)ed when in drought, an occasional print journal, with moneta goldsmith in 2014. her writing has appeared in sPARKLE & bLINK, Selfish, Yay! LA Magazine, A3 Review, and elsewhere. she lives with two chihuahuas and several pseudonyms.