The Purring on Russell St.

Another word for house is

Gender. Another word for

Engender is house. An era

Onto which we awaken: it is so

Only without any of

Revitalized to a fault, the

I have been guilty of faultily

Perceiving in the past.

The downloads in rows to

Stow. They stopped participating in

The purring, but let’s not

Forget it exists. Or that it has stopped

That of being likened to sleep.

The delicates from the other loads.

Are ready to spend our one more night.

Antidote to the Prior

That idea I had which / You dismissed just so / Happened to land lucky / For you comfortably in / The stream like down / From a goose after / A good old-fashioned / Goose-startle but it’s not / Like this stream is anywhere / Near here and I can go / Retrieve my shit that / Besides is prolly all / Drenched thru but the real / Worst part of losing / My idea thanks / To you is that soon / After a tornado (!) / Tore thru and totaled / My fence by which / I mean my enclosure 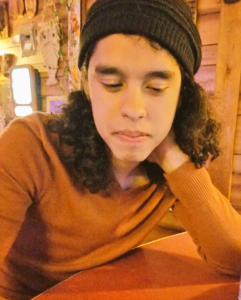 David Alejandro Hernandez is an undocumented writer, originally from Guadalajara, Mexico, but mainly from Northern California. He holds degrees from the University of California, Berkeley, and Washington University in St. Louis, where he was appointed the 2018-2019 Senior Fellow in Poetry. Poems appear or will shortly appear in Fence, Oversound, OmniVerse, and the Berkeley Poetry Review, among others.