As the Beasts Arrive

Arrival like animals, from the soil and fungus, is becoming more frequent in this age. To gain strength in the rain or in a cocoon of snow, to awaken just as the tiger is securing your throat into place–researchers agree, this is the future.

We have learned recently that it is possible for humans to be built by sharks and bears, and by other beastly creators whose fossils we are still planting in the ground. Who are these mysterious architects, the predatory animals, really? Lions awaken in cages, and begin to take into the mselves the feces we have mined for them. In return they give us pieces of cows and chickens. But every day more lions awaken on the savannas to plant gazelle there. They awaken as though we never had anything to do with them. As though we did not bring them into this world. As though we did not shelter their hides all these years in our drawing rooms. Their independence is endearing and terrifying.

It’s a losing battle, lions! Even with bears and feral hounds at your side, even with sharks and crocodiles all laboring to assemble us, humanity will achieve oblivion. 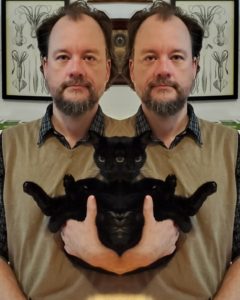 Danny Solomon teaches anthropology and women’s studies in the San Francisco Bay Area. His fiction, poetry, and scholarship have appeared in Teleport, Canary, Humanimalia, and elsewhere. Lately, Danny has been trying different ways to get unstuck from time. One recent effort was featured in the magazine of horror Novel Noctule, and another has appeared among the irregular fiction and comics of Middle Planet. Danny’s current ethnographic project is on the social construction of time by dinosaur researchers and tourists in the American West, some of which can be found at Engagement. Instagram: @daniel.allen.solomon