Nobody rides with Dil. He doesn’t pick up anyone or talk with others or even drive his assigned vehicle. Dil observes. He takes notes on a laptop. He watches as the wheel spins and spins and spins. Dil works the day shift and one time an older woman on her bicycle, who his vehicle had offended, kicked the passenger side door where he was seated and then she gave Dil the finger. Dil did not protest despite having done nothing but watch as the vehicle drifted into the bike lane, momentarily appearing like it had meant to come too close to the woman on the bicycle. Dil never reported that incident. There was something about reporting it that felt wrong, like he was a snitch or that there might be some higher price to pay later down the road.

Somewhere along Mission Street, Dil watches two teenagers as they smoke cannabis. He watches men slumped on the sides of buildings. He watches the bright colors of fruits, and vegetables, and flowers as they pass on by. There are plastic toys and luggage and jeans for sale. There are murals. There are people who point at his driverless vehicle. Dil makes his notes. Dil clicks a few clicks. Dil likes how easily he can observe and how little he must do in order for the vehicle to navigate the streets. Then the vehicle stops. Dil hears the vehicle rev its engine. Dil hears the vehicle put itself into park mode. He hears the vehicle turn off its engine. Dil makes a few more notes. He knows that these are new behaviors from the vehicle. It has never stopped in the middle of the street. It has never turned itself off. Dil looks in the mirror. Here comes the traffic. The cars are slowing behind his vehicle. Then there are the horns. And more horns. And then the first car behind his vehicle swerves into the red bus only lane. The driver of the first vehicle gives Dil and his vehicle a visibly forceful thumbs down sign. Then there is the next car. Dil is not surprised by yet another middle finger. Then there is the next car. The driver stops alongside Dil’s vehicle and throws a balled up food wrapper at the driver’s side window. Dil is tentative but as the line of cars behind his vehicle grows and the horns consume the streets, he decides that he must act. He reaches over to manually take the wheel but it cannot be moved. And then he hears the vehicle’s engine turn back on. It puts itself into drive mode. It starts back down the street.

This is important: Dil does nothing.

The vehicle continues on. And Dil continues on. They drive for a few more blocks and then it happens again. But instead of stopping in the middle of the street, the vehicle puts on its blinker and pulls into a parking space. Dil hears the vehicle rev its engine. Dil hears the vehicle put itself into park mode. He hears the vehicle turn off its engine. Dil makes his notes. When he looks around to see where the vehicle has stopped, he sees the piñatas. The vehicle has brought him to a store that sells children’s toys, and plastic robots, and yes, piñatas. There is a man on the sidewalk who stands at a small grill, he is cooking sausages and peppers and onions. People are walking in all directions. There are pigeons. Dil realizes that the vehicle still has on its blinker. He listens to the sound of the blinker. He reaches over and tries to manually turn off the blinker but he cannot get it to move.

But this time, he has a thought. What if he did what he thinks the vehicle might want him to do? He stares out the window at the assortment of piñatas. He listens to the blinker. He opens the glove box and takes out his wallet. He opens the door and heads into the store. He buys three piñatas. One is a woman with blonde hair. One is a man in a suit. And one is crafted in the likeness of Donald Trump, although he feels like they may have missed the mark on the last one. Dil opens the doors to the back of the car and he places the piñatas in their seats. He buckles their seat belts. He returns to the passenger seat and then he waits. After a moment the blinker stops. And then he hears the vehicle’s engine turn back on. The vehicle puts itself into drive mode. It pulls back out. It waits for a bicyclist to go by and then it starts back down the street.

It isn’t long until the entire group, Dil and his piñatas, are sitting at the top of an incredibly steep incline somewhere in the Bernal Heights neighborhood. The vehicle is making strange noises that are new to Dil. They are positioned in a way that they are all forced to look at the sky. They watch the clouds part and then close and part and then close and part and then close against the sharp blue of the world. They are waiting for the vehicle to decide what to do. Dil realizes that he is gripping the door handle. He releases and makes a few notes. When he is finished, he goes back to gripping the door. The vehicle keeps inching backwards. It seems to be testing the brake system but it will not proceed beyond the stop sign. Dil looks in the mirror. He sees the three piñatas staring straight ahead. He sees the bottom of the hill. There are outlines of people down there and they are crossing the street. They are carrying bags. They are walking about.

And then, with her words ringing in his mind, Dil realizes what is happening. There is a man at his door frantically waving at him through the window. The man is pointing at the empty seat with only the steering wheel. The man starts to slap at the window. The man pulls on the door handle and appears to be in great distress over what he is witnessing.

Dil feels it then. He feels the vehicle losing its grip on the road. He feels the force of the vehicle starting to inch backwards. He feels gravity calling the vehicle home. And then he unbuckles himself. He pushes open the door and reaches out for the man who is waiting outside the vehicle. He struggles to embrace the man and the man is clutching and pulling at Dil. Both are trying to find the right grip. The right embrace. The right distance from the vehicle. 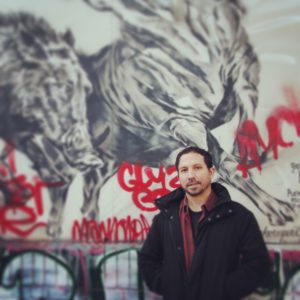