Caught on the wrong side of the crucial five minutes, the barrier filters us gently, shifts its

wind-softened baleen as it meets the tarmac. The morning an extremity, the water-garden

across which the Celtic Tiger mansion spreads its reflection. Still unprepared for the shadowy

mouth of the locker room prefab, the dusty rotten apple smell as your eyes adjust, I think of

pale keratin and exhalations so vast that they gather the world in their dwindling space. The

comma-like void in a twist of enamel. Ears, shells, and whirlpools are contained in the

silence at the barrier, the waterproof huddle at its edge, the cyclist wavering to a slanted halt.

Stripes on reflective jackets at dawn look like a gleaming dart of a fish’s side, in a depth, in a

space I can’t imagine yet. It is a while before I address the bottoms of my lungs, my breath’s

outer edge, fashioning a paneled home to cinch the year’s darkness in hourglass form. I won’t

see the soaring arc of bone, my continued refusal the thing that undergirds us. I leave my

phone in a drawer most days, only acknowledge the problems when they drift to rest on

darkened sand, cavernous and bitten clean. In the Supervalu the bodies of trout are draped on

crushed ice, eyes like sunken blisters. In disaster films there is always a clutch of abandoned

cars on a bridge. 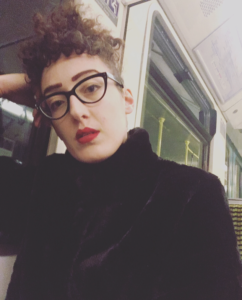 Alicia Byrne Keane is a PhD student from Ireland, working on an Irish Research Council-funded PhD study problematizing ‘vagueness’ and translation in the work of Samuel Beckett and Haruki Murakami, at Trinity College Dublin. Alicia’s writing has appeared in The Moth, the [PANK] blog, Queen Mob’s Teahouse, Abridged, The Honest Ulsterman, The Cardiff Review, and Entropy. Her collection Planet Tuesday was a semi-finalist for the Tomaž Šalamun Prize.