You won’t see anything but blue light.

If it was a dream, it wouldn’t be easier. I forgot when I woke up.

Some kin of animal is that sleep. I talked my skin off.

If somebody else was directing I wouldn’t have noticed,

but fish don’t have hands, so how do you pin one down?

You connect with hooks, that’s the thing, the way you do it.

He put it with hooks. I don’t know, it’s totality or something, but the skies off,

like in a dream—it’s the sky but not the sky. It’s mostly just blue light,

covered up with haze and you have to talk louder to be.

There wouldn’t be an urgent totality from another point of doing.

If it’s transit in your tenth house you have to think about the things like:

this is the work I want to life while I live this life I want to work but I live.

I’m not talking around things, I’m something in between to what I say,

or something in between to my mouth, my hand to type, or the typist, I guess.

It’s more blue light, it’s fucking everywhere. I wake up in the night and even you, conflated

you, on the blue light still,

I let you take it out. Just a little bit, it was plastic. The kind of thing you talk around, its edges.

Does it radiate? You never get my pacing right, never catch my tone.

I’m wet form the cloud cover, I’m so wet I stretched out, but he didn’t get it, it doesn’t punctuate and less I tell it to him and less you tell me my night function, blue. I won’t repeat it you heard what you heard,

everything a question of its breathtaking. 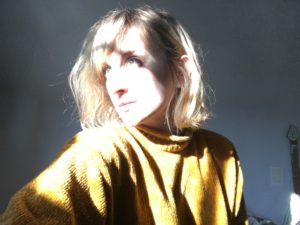 Tasia Trevino is a writer and musician originally from the Central Coast of California. She is currently based in Iowa City, Iowa, where she is a fellow in poetry at the Iowa Writers’ Workshop. Prior to starting the Workshop, she wrote/performed music with her band, Dowse. This is her first poetry publication.