The buildings I pass are the same for years and then they are completely different. The red one is now cream, and the cream one is now teal, and the vitrines of the sunglass store are empty. I am accustomed to addition, addition, addition, but not shifting. My inattention has allowed this. These days I turn at the park, which lies on such a slight incline that when I’m not my bike, I don’t even notice it.

Many are grateful for a single night of combat, so many the greatest danger to the crowd is stampede. The yellow stripe of my sister’s jacket disappears under boots until by her arms they grab her. We live in a dangerous state of lack of conclusion. I am unwilling to concede that anyone can understand the nature of the whole, but you may be lightyears ahead of me. Violent events occur quickly and nocturnally.

Our possessions exist in the continuum of thievery. The thought of leaving is as strange and vague as talk of revolution. I break for lunch when I begin to experience despondency. When I look into the faces of the protestors I see the ghost bikes painted porcelain-white, adorned with silk flowers. Incremental reforms are implemented frequently.

Upon reaching the mindset of perfect reconciliation, urges are much lessened, but is it better this way?

Because night still opens over the outskirts of the city and stacks in the street like bricks. When I don’t know where I am, I follow the barefoot man cruising up ahead. Anarchy especially obeys the laws of energy.

But radiating heat and a cozy serenity get me only so far in terms of intimacy, for in the nightstand and the closet lie ingots of bronze and silver and clinking boxes of bullets, the silhouette of the BB as dainty as a Czech glass button and the crude, lethal thing only so far from hand and mind at all times.

There was a bird nesting below the window and when I shone a light I startled it. In the nest, a chick and an egg of mismatched ages. I was checking the floor we had just finished with a coat of polyurethane. The universe I am a part of requires periodic exfoliation, the removal of dead material and the obliteration of its image with a material so viscous and toxic that when I go up at night, the whole apartment is reflective.

I believe in compassion for everyone but that nothing is sacred except a child under five and the illumination of the void, that nothing could mar you in my eyes, not the scissors, not the pipe, that the whales returning to the waters will soon be chased off by cruise lines, that the bird I found the next day died, that the devil does not exist and thus cannot offer anything, and that in those varied towers sleeps a public that’s alive.

We are slowing as we arrive at the point of stasis. It is like missing the exit from the roundabout, then going around and missing it again. It is a situation of grave psychological instability. For the sunset is nothing but an inundation of color and what beckons is the lines, the yellow one jagged beneath my wheels, the blue one flat against the sky. 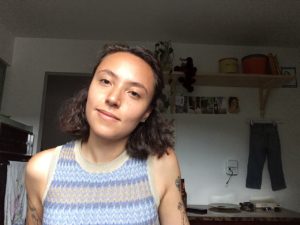 Serena Solin grew up in Leonia, New Jersey and currently lives in Maspeth, NY. You can find more of her poems at serenasol.in.