to translate the emotions into images—

vestigial remnants, a procession of ghouls
watching the ancient statue start to crumble—

that clench of dread

there are feelings beyond logic
unpinnable by human tongue

as foretold in legend

as writ in the ancient tomes

poor lady, she had better love a dream

yea, though some hath sworn she were a window

the fate of the miller’s one beautiful daughter

a necklace, a ring, a firstborn to bequeath

that to name the true name can unmake anything

the unguessable name in her mouth, a sad grin

the bested-one’s fury splits him into two

how could splitting be the end of anyone

Please answer to the best of your ability

where does your spirit hurt

do parts of yourself
feel missing or broken

can you resist the delicious
call of the ocean

when did you stop dancing

can you feel within yourself
that little girl who held, triumphant
a flaming skull

why are you so resistant to yoga

have you tried not thinking about it

how long have you experienced these symptoms

why are you doing this to me

The Content Is Supposed to Burst from the Container

I cover the void with crystals
piling over it with amethysts and jasper.

In the center, not a pit but a dark mirror.
Scry in it and find your face.

I cover the void with bones.
Some kind of person

must feel a way about them.
Bones are not-void. Bones suggest

the good shit, in tiny gold tubes.
Could a void give you a name brand?

Probably. I cover the void
with cinched waists, shoulder pads.

Nightly I embalm the void.
If nothing else, it will be succulent.

I cover the void with tarot cards
which are also emissaries to the void.

They return with dark mirrors.
To know the void is to know

almost nothing. I cover it
and nobody can see

what they can’t see
they’re not seeing.

Exhibition: What Is It Like to Make Something That Matters?

Fig. 1
Woman Possessed by the Spirit of Despair

[Pictured: Photograph. Woman, late twenties, slumped in a desk chair before two computer monitors. Below her, a desk calendar’s frenetic scribbling suggests a chalkboard theorem in a film about being acknowledged. The bird trapped in her ribs has a death wish. When the phone rings, she steels herself against it. A calendar is calling. A receipt. An insult. A password. The mistress, then the wife. The dry cleaner’s. A magazine. Her life?]

[Pictured: Painting. Ambiguous humanoid figure on a bridge, bald, hands sliding down the face, mouth a perfect howling O. Two shadow figures in the background recede or advance—it doesn’t matter—they are always lurking at the corner of awareness, aren’t they, beneath a sky gone haywire. Boats are melting. The figure is melting. It is not even lunch yet.]

[Pictured: Printout of an Outlook email. Clear tape runs down the spine-like center, patching over violent rupture. The printed text makes reference to {redacted}. Says, “The other assistant found a way.” Handwritten on the back, notes for the latest PR fluff piece on energetic tile, plush velvets, “honesty” of material—which is funny. Isn’t it.]

Fig. 4
Mayor George B. McClellan, front row center, and other city officials inspect the subway in 1904, courtesy of The New York Times

[Pictured: Retouched newspaper photo. Rows of men in suits and boater hats sit on what looks like a wooden barge. McClellan is really there. One of the “other city officials” is an impostor; someone painted him a new face. They did a shitty job. Imagine drawing (painting?) such attention to some should-be-hidden error. Or thinking this looks “real enough.” Imagine being asked to do something so stupid, and to lie. Imagine thinking no one would notice.]

[Pictured: Retouched painting resembling a rhesus monkey: straight nose, whole oval face haloed in hair. The mouth an O that whispers into haze. This portrait was Jesus once. Some civilian saw the flaking original fresco, thought, “Someone should do something.” Thought, “Fuck, I could fix that.” She could not. Such confidence. Doubled down on good intentions when questioned. Funny? Sad? Should she have done it? Probably not. A casualty. A treasure. The internet has spoken: we love it.]

Fig. 6
Portrait of the Artist as a Vain Child

[Pictured: Photograph. Four preschoolers watch a movie in their pajamas. Only one looks at the camera. You guessed it. On her face, the artist has dented the photograph with ballpoint pen, drawing three long eyelashes above each of her eyes. Sweet little beebs: the one in the picture who looks to the photographer, and the absurd kindergartener who thought the eyelashes would look real, an improvement, dark and vertical and cartoon-thick. Should she have done it? Probably not. A treasure. Tenderness for the little trickster, making something, anything, that pleased her.]

Fig. 7
Woman Watching The Man Who Killed Don Quixote at 2:00 am on a Work Day

[Pictured: Photograph. The spirit of despair, temporarily displaced. For two hours, the woman is filled only with this movie, about a man named Toby who hates his job as a director—he is tired of making bullshit for pay, he wants the authenticity he captured once in a student film, hiring amateur actors from towns in rural Spain, not knowing he cursed his lead to become Don Quixote. Sometimes authenticity is dangerous. Sometimes authenticity is fake. The “real” Don Quixote was invented by the book-character Alonso Quixano, himself invented by author Miguel de Cervantes. So: a character inside of Toby’s film which is inside of Terry Gilliam’s film is channeling the character Alonzo who is pretending and then believing himself to be a character called Don Quixote, written by Cervantes. What was it about this movie? Adam Driver’s swiveling hips? The absurdity, theatrics? Being quite literally possessed by literature? A four-hundred-year chain of art-making? Men using their powers for good? Invoking old words that still matter? That anything fucking matters? It took real-director Terry Gilliam nearly thirty years to make The Man Who Killed Don Quixote, as though it were cursed. It was released in the U.S. for only one night. The light from the movie screen falls on the woman’s face. Something unacknowledged glows.]

Fig 8.
Woman Possessed by the Spirit of Escape

[Pictured: The woman smiles; last day in purgatory. She wears a summer dress and heels, lips red. Between the ringing phones and calendars and melting shadows and the screaming, she has been taking other calls. Setting up “dentist appointments.” Lying the way they have taught her. Her skin glows for the first time in a year. Everyone asks why she is “all dressed up.” She tells the truth: she is in a holiday mood. After, she’ll leave for a weekend of art-making, time off, a new job where she’ll make some things that please her. Now she can float at will, rising out of the frame, beyond the desk and walls and scaffolding, beyond anyone’s reach. She is rising where no one can see her, can get {to} her. She is rising where she decides who can, and if.] 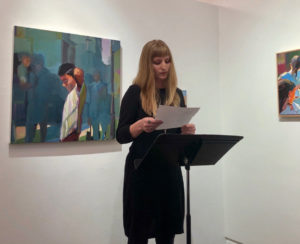 Sarah Lyn Rogers is an acquiring editor for Soft Skull Press, a contributing editor for Catapult magazine, and the series co-editor for the anthology Best Debut Short Stories: The PEN America Dau Prize. She is the author of Inevitable What, a poetry chapbook focused on magic and rituals, and writes a column for Catapult called Internet as Intimacy. For more of her work, visit sarahlynrogers.com