Materially, erasing is defined as removing written marks. Immaterially, it is defined as removing all traces of a thought, feeling or memory. The best kinds of erasures hover somewhere in between the two, clearly removing much of its source text to create new poems while still leaving traces of where it came from. Sarah J. Sloat accomplishes this careful balance in Hotel Almighty, a book length erasure of Stephen King’s Misery.

Like many of King’s novels, Misery follows a writer, Paul Sheldon. Sheldon is a successful romance novelist who has just moved on from his eight-book series on protagonist Misery by finishing a new novel, one more “serious” than its predecessors. After finishing its first draft, Paul gets into a serious car accident and is saved by his biggest fan, Annie Wilkes, who tends to him at her home. What starts as care turns into control as Annie resists Sheldon’s killing off of Misery in the series’ final book and his subsequent departure to another genre entirely. Through graphic torture, Sheldon is forced to write a ninth book on Misery, one fit to Annie’s specifications.

Misery is ultimately about the writing process. In one way, it engages with the more superficial aspects of balancing audience and expectation with personal vision. But more deeply, it explores the mode and function of artistic creation as it relates to life itself, the ways confinement and suffering can become means to radical opening. Sloat’s Hotel Almighty internalizes all of this, both commenting and building on King’s explorations in both the form and lyricism of her erasures.

Each of Sloat’s erasures are contained to a page without any narrative arc or connective tissue between them. Instead, the pages act as ephemera, each a tiny translation of an elusive trace idea from Misery. One of the most compelling aspects of Hotel Almighty’s erasures is its varied forms of erasure, from white out to colored pencil to circled words linked with lines to correction tape. These variations highlight the multiplicity of possibility in the artistic process, revealing both the necessity of faithfulness to the accidental and faithfulness to authoritative decisiveness that is inherent in creation.

Erasures are born out of a series of accidents—the eye scans a page and from a limited source of words chooses a handful to create something new. But each word kept requires an active choice by the hand of the creator. These accidents and intentions are obvious in Hotel Almighty as each form of erasure—whether white out fluid or colored pencil—has an obvious relationship to the content of the poem being made.

In one erasure, Sloat covers the source page with white out fluid so its lines are still faintly visible, and in black ink circles the words and phrases she’s left untouched:

She likens circles to sleep, a place for filling, and even linguistically recreates the circle in repeated use of the exclamation o. And by circling the words themselves, she names her own poem hypothetical—one possibility for filling of many possibilities. Like most of the erasures in Hotel Almighty, the page is littered with collaged images—in this case, a bunch of solid circles that look like punch holes. Sloat engages with King’s text in the best way possible—by recreating the very idea at its heart.

Though not all of the collaged art has as strong of a relationship to the content of its poem, most do. And regardless of meaning, all are visually striking. With such a focus on image, and particularly on color palette, the erasures feel less like poems, or even visual poems, and more like art objects. Unlike many book length erasures that feel like a textual translation, Hotel Almighty feels like a different kind of translation, one concerned less with meaning and more with feeling.

Included in the promotional copy of Hotel Almighty was a packet of materials: a torn out page from Misery, some glue, a crayon, bits of string, a color strip from a fan deck. The gesture is emblematic of what Hotel Almighty asks of us as readers: to engage with the world as creators, full of agency, accidents, and intuitive feeling. 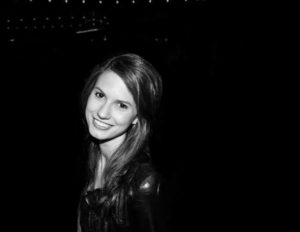 Olivia Muenz holds an MFA in creative writing from Louisiana State University, where she earned the Robert Penn Warren Thesis Award in prose. She received her BA from NYU and is currently the Nonfiction Editor for New Delta Review. Her work has appeared or is forthcoming in Gulf Coast, Black Warrior Review, Salt Hill Journal, Anomaly, Denver Quarterly’s F I V E S, The Boiler, and elsewhere. Find her online at oliviamuenz.com