Erasure from Shakespeare’s “The Rape of Lucrece”

Her, under angry hands

on the grass. Sweat

Her skin, his prey.

to rise up and fall. 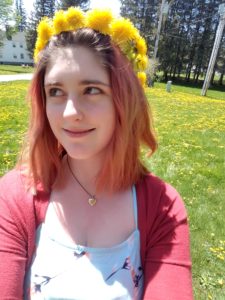 Rachel Evelyn Sucher is a queer-identified Vermont writer, activist, performer, horsewoman, and intersectional feminist. Her poems have been shortlisted for the International Literary Award (Rita Dove Award in Poetry) and the Dan Veach Prize for Younger Poets, and longlisted for the Brett Elizabeth Jenkins Poetry Prize. Rachel is the founder & editor-in-chief of COUNTERCLOCK literary & art journal, an editor at Sooth Swarm Journal, a social media manager at Half Mystic publishing house & literary journal, and a founding member and editor at Mandatory Assembly literary journal. A mentee in the Adroit Journal Summer Mentorship Program and the Glass Kite Anthology Summer Writing Studio, she has also attended the New England Young Writers’ Conference at Bread Loaf and the Champlain College Young Writers’ Conference. Her work has appeared or is forthcoming in Tinderbox and Rising Phoenix Review, as well as the anthology Destigmatized: Voices for Change from Madness Muse Press. Rachel is also a 2017-18 Trevor Project National Youth Ambassador. When she isn’t wrestling writer’s block or the patriarchy, Rachel can be found snuggling puppies, making music, and overthinking in her nerdy poet’s notebook.