“Progovac…has argued that specifically V[erb]N[oun] exocentric compounds represent ‘living fossils,’ that is, constructions dating back to a proto-syntactic stage, now co-existing with more complex syntactic constructions…the syntax that supports their formation (proto-syntax) may have facilitated a transition from a pre-syntactic (one-word) stage to modern syntax.” – Ljiljana Progovac & John L. Locke, “The Urge to Merge: Ritual Insult and the Evolution of Syntax”

seedling   in my hair

once  we spoke   planarly

splice   with your citrine perm

perpetuity  time   or a reel

your curls   subjacent  to me

eventuality   of difference   and incident

Prose Poem I; or, Astral / Astray

The bookcase is a reconceived cupboard whose recesses give culling an energetics. When every morning I enter its sight line, I don’t know whether to look for a self-ejected book or its absence on the shelf. Days after his cremation, my mother’s mother knew my mother’s father had spoken because a book leapt overnight to the linoleum and landed on a page of amatory epigraphs. Though I demand that augury be bird talk, I would inspect a spine-plied book on my carpet. The hollow its sallying formed would become an inlet for cuticles that I read as gulls. I own a crystal ball denatured by its station on the third shelf. Years before his cremation, my mother’s father self-published a mauve book of love poems dedicated to my mother’s mother. They tritely rhyme in couplets. They’re third in the pedestal-stack for my goose-neck bedside lamp. Ovid innovated the epistolary poetic form and then died of exilic grief in Romania. Which is the poignanter distinction? Both to date remain aureate. Beyond the cupboard, I mystify eye-glints of the maybe-fox, their shadowy predicate, my lusty fern. Phyllis to Demophoön’s absence: Do tears too have arts? Sleight of a mid-sob hand displaces the opportunity for scrying. I do expect a token of burnt communication. Why dispute the vibrancy of ash?  From Latin to English, a tear turned grandiloquent. Which of you pedants says lachrymose? I will read what’s indicated in print. I will indemnify myself against the slog of ciphers.

Prose Poem II; or, A Begrudging Multiplication of Sight

I was astride a hillock and gobsmacked. By the thrashing, from periodic semi-trucks and a carcass I hadn’t hoped to espy. I cried earlier into the buttes—whatever was far off and undulant—and thought coltishly about Hegel. Surely “Spirit” escapes the imprimatur of a treatise or life’s work. Nor is “Spirit” breath, knowingness, the accrual of penchants. I was beside the hillock I bellowed to as I clutched its loamy shoulders. With my feet, while the bones stayed strewn and a guardrail pricked my circuit. If I isolate a wheat stalk to stare at, do I recognize “Spirit” or refute it? Or am I an indiscriminate witness who fancies himself a connoisseur, an aesthete of clods and the remotely vertical? I have not finished the preface to The Phenomenology of Spirit, but I have awoken to streaks of incandescence after conferring with the newly dead about a table. When tears wend between dreaming and waking, a semi-stage of visuality dawns. Irruptively, yet not untenderly. On a porch swing, I remarked that the crows are more present these days, though I chose not to complicate the claim. One of my neighbors mewled at me while the trees kept the others enrapt. A multiplication of crows may correlate with a spike in asceticism or mark the weather’s flux. Yet what is weather if not the absence of a conflicting condition? I dwell in the end on the suffixation of “-ock” to “hill” and hope for its primeval agency.

Prose Poem III; or, Perching on a Wisp of a Branch as Primeval Trans-Species Instinct

Notwithstanding prehistory’s obscurity, “-ock,” it seems, was never an independent agent of language. Nor does a quail pacing the length of a sycamore’s frailest branch constitute a rarity. In Resurrection, Ellen Burstyn contracts through trauma the ability to heal others and at one point, palms extended, interacts vibrationally with a beam of roseate light, proof for scientists that she is indeed adroit. To equate discovery with illumination, then, is to court the glint of a blue lace agate once opacity has claimed it. That is, the preconditions for realization may preclude lustre but not a smooth surface. Inversely, language study always begins with a verb purged of interest—Latin’s is to love; to loosen’s Greek’s. Paradigmatic because predictable, first verbs effect a sham systematicity that gives way to thorniness only if the learner is florid enough to shame pruning. And yet, grandiloquence as identifier—a speaker’s devotion to twirling the densest foofaraw on the slimmest beltway—cannot escape fraudulence, dependent as it is on vampirism of a pre-existing pool, vastly shared.

The Continual Approximation of Nearness

“After the mother died action is consumed at a present time also avoided, in the sense that first one entwined formed doesn’t see one’s relation to her and therefore to other things, never having seen this.”

“ambagious” garnering a red squiggle   once

my face   contracting   a clay sheath

her wrinkled Roget’s   a prize despite misspelling “ravine”

my attachment to i under pressure   “cornia”   “suburbinization”

lace moon following us on the highway   a car-window quirk

“I never said that”

the notion that sentences are crass

refusal to stroke a downy scalp

tumescence of the fingers

too white whites of the eyes   intermittent sense

corrective   not a clot 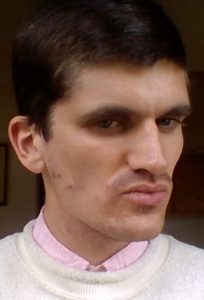 Paul Bisagni is a lapsed classicist, one-time applied linguist, and current MFA candidate in poetry at the University of Idaho.