A bliss before the world knows

One sunset that burns forever, depending on how you look at it (cock your head just right)/ is this what you expected? A clenched fist, an orange moon: one bright light winking on and off in my center, in dreams I remember: I’ve swallowed something that disagrees with me and it will take 70 years or so to expel/ the funhouse mirrors on Mars are all broken/ this way, this way: you will be visited by three ghosts tonight so drink up: The War Machine, Emily Dickenson and The Orchid Farmer sing alone to separate ash heaps alight with birds and worms: the horizon’s burning regardless/ like a moving target my old friend floats in the air dressed in white, neither air nor earth: the ghost chain, I am on this landless rooftop: wind aflight like flute music this is a long and eyelash fluttering crucifixion fever, everybody’s doing it/ the red sky/ my near death by drowning incident/ the hanged man: this is my card, or possibly the fool (I forget) the red sky/ the heat death of the universe, doesn’t it disappoint that it will always be ahead of you/ I am devouring towards it rather than the other way around/ if you think you’re going to learn to fly, you’ll be disappointed/ in time you will be visited, they’ll have you pick a card like a magic trick and your first wound will manifest like a fire

At a certain point, like a blinking green light at the center of a pounding hangover: you begin to wonder

Whose memory is this?

Whose memory am I going at with a knife, a fork and a hatchet?

The wooden planks beneath Venice gone from rot to bonelike understructure

You consume enough, plucked like blackberries close to fermentation

What chases them down the bright corridors of their bloodless dreams

The possibility of desert sand with no footprints

Ah then how did I land there?

Like the moment I realized I had the flying sickness

Deep time, they call it

A bridge of shipwrecks stretching and groaning

Up and high to where it’s always night: the annihilation curve (mirror mirror)

What phrases occur to us in the fog

In each dream, each excavation: something follows

I would like to digress now from starry eyed funereal planning and talk about the other subject I’ve talked about quite a lot recently: people who return from disappearance, a magic trick: Amelia Earhart’s bones used in a ritual to tell the future/ the speech in which an Irish prime minister used the phrase “comely maidens dancing at the crossroads” (a misquotation but who cares), the animal of unknowing: nature’s perfect predator/ it’s the vanish and the return that form the motion of an offset circle/ twilight among the begonias, the state flower and the desert/ Colonel Kurtz and Jesus Christ and all their retainers/ in a long enough timeline, fiction disappears/ the top google search regarding William Shakespeare is, “were Romeo and Juliet real?” because at a certain point we simply accept that the founders of Rome were suckled by wolves/ it’s like a wave function: time, compressing up to the present moment and then spilling back out into another empty forever like the place where the rivers empty into the sea while the seas quietly empty back into the sky/ my island, my America, if you can’t tell whether I’m weeping or chuckling: don’t ask because the answer will disappoint you/ I’m going to snap my fingers a second time and let this charade continue burning until it gutters out or blisters my hands/ the island where I come from is sinking into brine and reappearing on the other side

When they ask me, with a black bag over my head so I can’t cheat

What I know about the country called the past

Where I’m supposed to desire

And Ovid is on the water 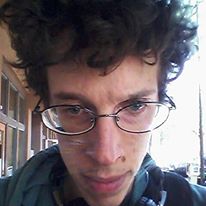 Nate Maxson is a writer and performance artist. The author of several collections of poetry, he lives in Albuquerque, New Mexico. Rarely employed, he spends most of his time plotting subliminal takeovers of other realities and or talking to his cat.