Little Girl Gray appeared to me last night again. She was standing by the bed, her hands folded in front of her, watching me. She stood about 5’6” and her whole body was gray, like an old photo. Her hair was in a bun and she was wearing an old fashioned, Victorian dress with a high, lace collar. I began to scream. Michael woke me up. He didn’t see her.

Little Girl Gray appeared, but this time she was inside of me. She was a child with pointy teeth—a mischievous look in her eyes. She told me a story—that she had been kidnapped and used, but that nobody understood her because she had fallen in love with her kidnapper.

“How am I going to testify against him if I’m in love with him? I don’t want him to go to jail,” she said. She bit her lip, drawing blood. And yet, there was a part of her that seemed to be smiling. She seemed to exist inside the red chambers of my heart.

Little Girl Gray is the dead girl who lives in my head. She appeared to me in a dream during my hospitalization in 2018. I think she first came as a warning, then decided to stick around. She has gray skin, gray eyes, and long gray hair. She drifts easily between adolescence and adulthood. Sometimes she’s 12; sometimes she’s 40, but she is always herself.

Sylvia had the room next to mine in the hospital. One night, she was banging her furniture against the walls. And then she let out a scream that I still hear in my nightmares. Something shattered. I never figured out what it was—you’re not allowed to have anything glass in the hospital.

48 hours later, Sylvia stepped out of Solitary. I almost didn’t recognize her because her face was so swollen from the sedatives and the rages. She looked like she’d been underwater a long time—like the way my dad describes the dead body he pulled out of the Ohio River when he worked on the barges.

She did not improve. She stopped talking altogether. Her parents visited her, but it was like she couldn’t see them.

She paced the ward all day, sometimes clapping and stomping as if she had a rhythm she needed to exorcise. Her nose bled. Sometimes the nurses noticed and sometimes the rest of us had to tell them. Sylvia was not aware she was bleeding. She just kept pacing.

Once, she grabbed me by my hair as I put a puzzle together.

I held my breath.

I went to Group. When I came out the puzzle was violently disassembled. I say “violently” because the pieces were bent.

Often, I came out of Group for lunch and found her eating off my tray. I learned to leave Group early to defend my food. There weren’t enough staff to do it for me.

I wonder what happened to Sylvia, usually when I wake myself up at night, screaming because Little Girl Gray stands at my bedside.

Maybe she’s a ghost who’s come to haunt me.

Little Girl Gray Becomes A Real Professor In Her Brain

Why is she “Gray” and not “Grey”? How does she know for sure? What if she’s made a mistake?

sometimes i think the whole secret to writing is in my genes and alan rickman pipes up and says you’re not wearing jeans from his place on the desk and alice notley laughs and it echoes around the room as her chortling comes from multiple places on the bookshelves. obviously social isolation has made me go mad [again]. but it’s good to have a healthy dialogue with one’s books, especially because the cat can’t hear them. LGG says i must become a real writer or a real professor. alan rickman was sued for his film mesmer because he re-wrote the script without permission, and because he wouldn’t lick a woman’s eyelids, and because everybody said he wasn’t erotic enough, and they used actual mentally ill people in the film. everyone knows that alan rickman was erotic without even trying. the secret to being a real writer is to listen to what the capsule membrane encapsulating the brain has to say. it completes a neurological pathway of translation. the realest real writer is stephen king because he’s the only real writer who tells fake writers like me to write whatever the hell we want because he writes whatever the hell he wants and he does it for fun, so just have some fucking fun already.

LGG wants to live in multiple sestinas. and so, the work begins. alan rickman, from his place on the desk, scowls and says snape-ishly i suppose there are worse things, though, if it were me, i would just gouge my eyes out with a stick. alice notley’s voice rings from the bookshelves and says that she has done much harder things than sestinas and i say, “good for you, alice. oh, good for you, for christsake.”

LGG came to me again last night. She got me out of bed. I told her to be quiet—she might wake michael, but she laughed in her whispery life and took my hand from beneath the bedspread. She’s surprisingly strong. She took me to the dining room where she showed me an orange garden spider on the outside of the glass, spinning a web. We kneeled down to watch. The spider danced, an acrobat swinging from thread to thread. LGG smiled at me, and I was filled with awe. There has never been anything more beautiful.

on the 20th floor

dr. wells warned me that i might be swinging into a depression. just what i need. oh well. maybe there will be a surprise in the mail for me today—i ordered another alice notley book and an awfully big adventure. oh…the ativan is blooming.

i’m still recovering from surgery. they removed my scalenes for my thoracic outlet syndrome. the pain is terrible and the scars hurt. i asked alan rickman for his opinion. he said it will heal. for once i don’t believe him. i focus on what i’ve lost.

today’s my birthday. LGG went to the publisher today. she has her dead, gray fingers crossed. alan rickman says good job, my darling from his place on the desk and alice notley flips me the bird. i secretly think that she secretly didn’t think i could do it. all those sestinas. 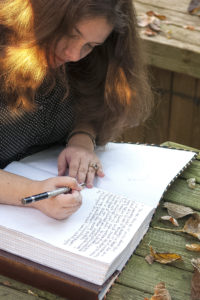 Megan D. Henson is the author of two collections by Dos Madres Press: What Pain Does (2018) and Little Girl Gray: Sestinas (forthcoming). She earned her MFA in Creative Writing from University of Kentucky. She lives in Cincinnati, Ohio.