my gender is a little late today

my gender & i are still rookies in the near future

my gender can figure something out at some point

my gender has been pretty busy for me

my gender likes to be a good roommate

my gender says “where do you live now?”

my gender may be a few minutes late today 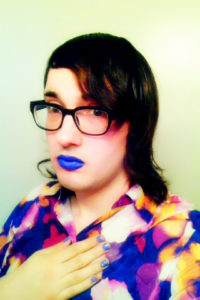 M; Margo is a person who writes and resides in Cleveland, Ohio. They are Founding Editor of Zoomoozophone Review and Publicity Director for Gold Wake Press. Their most recent books include yr yr (Ghost City Press, 2017) and Blueberry Lemonade (Bottlecap Press, 2015).