Where is our home? In the woods or in the stars? We wanted to be fairies. We never wanted to be aliens now did we?

Our houses are all being destroyed. Our home is gone. We know the ghosts have moved in and the pioneers too. Our lives are a mission to be accomplished by hordes of invaders.

We were so in love. How about now? Can we stay that way? No, why not? We can’t ever have anything forever.

We’ve forgotten what it means for anything to be beneficial. Nothing works out in the long run and the run keeps getting longer and longer.

We were always too antsy. Weren’t we? Can’t we agree on that? Let’s agree on anything. It’ll be our thing.

“With friends one is well but at home one is better.” (Leo Tolstoy – Anna Karenina)

We can’t erase us. We’re stuck in this state. This stasis is where we are. But tomorrow that can change. Yesterday it did. The declaratives don’t hold water but capture the steam. Distill. Try to show the proof as another way to say percentages.

We are being erased. We’re already gone.

We won’t ever be the same again for the first time.

We walk through the city limits. We won’t be looking for any friends to find. We’re an island in the streets. No one in between. We start and end as one, a dove in heaven left from earth with no more desire for crumbs and all done with the duties of being sent out. No more messages to carry. No more branches to bring back.

We are not long for this world but we’re not ready for the next one yet since we haven’t done enough research. And whose job was that? We had one job and we did that. We found each other. Wasn’t that enough?

Why do we have to keep it real? Can’t reality keep itself? Like, for real!?! We can’t keep this up. Not at this pace. Not at this slowness of our observations.

We remember when we were young. Separately, but we do. Now, we’re not that way anymore. Did it even matter that we ever were? Youth is the castle we’ll never get to. We are here.

We can belong to then if we want to but we know it’s best to always carry a bit of rejection on the hip. Six shooting no and not today. Quick on the trigger with a negation.

But we’re not pessimists. Are we?

We do consider the death drive a lot.

We live. It’s all we’ve ever done. It’s all we know about. What’s the deal with death? We want to be zombies and ghosts. We deserve that.

Somebody, please make that a possibility.

We haven’t come to any decisions as of late. We don’t agree. We don’t disagree. What are we even talking about? Oh, we don’t talk. Not the way we once did. The honeymoon is over.

We were supposed to be in this together but together is not a possibility. Our joining is a mismatch. Nothing fits just right. We settled.

We didn’t know it at the time. Yes, we did. We went to work on potential. Now, look out the window at where potential got us.

The world is coming down around our potential. It’s a good thing we waited until we couldn’t go through with anything. It’s good that we are where we are. Even if we’re not happy about it.

It’s awful. It’s terrible. Everyday is another horror story. We’re possessed by the spirit of caution. We’re worried but we weren’t worried when we needed to be, were we?

We don’t get any credit for taking any chances.

We aren’t having a good day. We’re so up and down. We’re hot and cold. We’re looking for more binaries to be.

We’re listening to an oldies station but the oldies are less old so we hear our teenage years instead of our childhood or our parents’ childhood. We don’t want to forget our mother’s favorite songs. We can stream some later when we have a decent signal. We could use a little bit of nostalgia every once in awhile. A bit of a distraction in times and people gone by. We don’t have parents now. We aren’t parents now. We stopped a cycle. Well, half of us. We’re not the same person. We have differences. We can be a split and nobody will ever be able to pick up the spare. And we’ll know that that reference didn’t fit our situation at all but we’ve both been bowling and better sports metaphors sail on over head. It’s ok. No harm. No foul.

Sometimes we want to be confused.

We were looking for something. Did we find it? We need to talk to the streams, the feeds. We need to scroll back through our limited sense of eternity together and see if we said anything. We say a lot some days and less on others. We make jokes. We don’t make much sense. We are da meeting da.

We are yeah meeting yeah when yeah yeah means whatever or no, not really.

We are a redundancy, a double negation, and a doubling-down. But in such, as all three, we never hit for the trifecta.

We lost a narrative when we started trying to tell our story. It doesn’t matter. It never did.

We have a history. We have histories. None of that is worth any space in the future textbooks.

History is being made every day and we all know that but it’s hard to know what’s being recorded and how. Although, that is becoming more clear as there are more and more news outlets and more ways to receive that news. We know the quarantine will never be forgotten. We know we lived through a crisis. We’re surviving a pandemic but we think about the reactions to Rodney King. We think about the lost and almost lost in 9/11, various blackouts, and Sandy. But this will hit home in a way that the Challenger didn’t hit us when we were in elementary. It’ll hit closer than the history of the wall coming down. We’ll know that this isn’t bombs falling and it isn’t 4 kids rounded up in Central Park but there was tremendous loss. More than many wars and in much less time and over much much greater space. We’ll relearn what place and placement mean.

We consider the impact of wearing anything on our faces while walking into the store or down the street.

We consider the idea of being the only person on an empty sidewalk in the middle of the night. We think about how wanting some fresh air could become a situation.

We don’t overreact and if we do we do. We’re OK with that.

“We were excited by the invisible.” (Elena Ferrante – My Beautiful Friend)

We used to be somebodies else. We used to find a certain sense of wonder in the mundane. We used to long for the unknown only as a sidenote. We wanted routine to fill the ledger but left room for potential in the margins. What happened there was its own category of mystery.

We used to look at the horizon not for hope but as an eventuality. Someday made us as excited as somewhere.

We didn’t intertwine easily. We weren’t made for each other.

All the nails have been bitten to stumps. It was something to do. Nobody will want to hold these hands.

We let certain hobbies follow us. Refuse to give them up completely. Who would we be if we did that?

We’re not who we always were but yeah, we sort of are too. Don’t get us wrong, we have no desire to go over our origin stories but we know how navels are made.

It’s four in the morning for us. For our understanding of the day.

We want to grab our things and walk away from this walk of life. We can’t. We haven’t yet. We’re up late. We have to be and the day is our night. We do our best to accommodate our surroundings, people including in that such sense of a locality. People can be conditions too.

“All through the night

Stray cat is crying so stray cat sings back

All through the night

They have forgotten what by day they lack

Oh under those white street lamps

There is a little chance they may see

We have no past, we won’t reach back”

(Cyndi Lauper – All Through the Night)

We’re not even with each other anymore. We’re not the same we as the story unfolds. But please, somebody just be here for the company.

This isn’t a Monday. It’s not manic. Who wants to write a song about woebegone Wednesdays? That’s when we’re at these days every day.

It’s not easy to sleep. It’s no big deal to wake up but staying in motion is a whole ordeal.

We lost sight of our false colors that faded away but that we hand-dyed into our lives.

We’re not here for the truth. Where was the truth when we needed it? We didn’t get enough of that growing up. Truth and reality are not the same thing but people have a hard time telling the two apart. We know how the two look kind of alike. But we also know how the truth hates being stopped on the street when somebody is looking for reality’s autograph.

We’re never close enough to the outlet when we start feeling our batteries drain. We ask ourselves do we waste what we have left on a notification from somebody we don’t even really fuck with? We ask this a lot. We’ve already asked this before somewhere in what we’ve already said. We get repetitive. 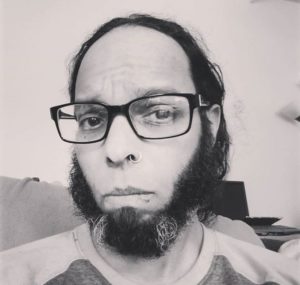 Kenning JP García is a diarist and the author of the notvel, OF (What Place Meant) as well as Furthermore. Xyr work has been featured in Black Imagination (McSweeney’s) and Puerto Rico en Mi Corazon (Anomalous Press). Xe is also an editor at Rigorous.