memory: when I explain girlhood I come back
to this, what bullying means, the knowledge

that she’s done this before, that she’s thrown up
in some public bathroom, deliberately, and this

is normal: not normal for me, but sometimes
I wonder that I never tried it, perhaps because

I worried for my teeth, for enamel that cannot
be remade: I know that the story is not Hannah

in the bathroom, and that they were all themselves
at sometime bullies, and yet what we see, what

we understand, is suffering: the facade of the new
It Girl discarded in a moment of fear, the moment

when eating piggies could save everything: (how
like the moment when to sink into TV and comfort

food is the only possibility): or Spencer in her car,
applying mascara again, breaking down again,

the effort to be whole too much, and those black
streaks just evidence of this: dwelling in the unbearable,

silent, on the stuck needle of grief, betrayal:
the actress says in interviews the worse Spencer looks,

the better she (the actress) feels: inhabiting
some human extreme, and pausing, unbearable,

unbearable: like the timeline, the one we obsessives
pick over, the one that makes no damn sense, the one

with all those bodies, bodies that drop in just weeks
(but years): this damn town: two TV years dwelling

on an elastic month, accordioned to utmost calamity:
how often does TV operate on time-sickness? distort

our own sense of what is possible: when does Jack
Bauer sleep?: like once, the time, six months after my last

day home sick, I turned on The Bold and the Beautiful
to find Ridge’s lost love still kidnapped, still just

on the verge of escape, the endless plot another
illustration of the risk of being a body, female, out

in public, the illness of being a body, the malady
of time spent dwelling in the open, eyes on you:

and at Rosewood High, the wondrous, ludicrous
not-quite-a-month, somehow true to despair

and self-doubt and homework and heartbreak
and mean girls and mean days and you know,

this damn school: I went to one of them
too: until at last the girls’ bodies snatched, laid out

on autopsy tables, stripped, chipped, recorded
under sedation: them waking as if from death

but it’s actually a greater violation: what is it to
lose time, to lose mind, to lose the whole lot

to the house and the house is the town, is the
show, is the audience, not just the anonymous bully,

the house is it all, is you, is me, watching their
struggle to even understand what could be real

anymore?: real doesn’t matter, what matters is
a strong brow, a perfectly glossed lip and

a finger raised to the mouth in a complicit Shh

right now—she said it as though certain, and
therefore certain, as though strong, and therefore

to keep from dying: it is the moment of too much,
embarrassment of excess, the dissolution of

resolve: and it’s hard: your vampire lover, cursed,
then uncursed (or cursed differently), sent back

into his evil, at last cursed again, yanked to
some other, demonic dimension, conjugated

out of this moment with hocus pocus, returns,
and the cloud of it, of immortality matched

to the blonde a certain California reveals itself
absurd, impossible, too much, unfulfillable: there

can only be too many words to describe it, I can
only be flagellatingly verbose even though

the blonde was so direct, and the only possibility
to explain such heartbreak is hyperbolic eloquence:

she could also say, like O’Hara, all I want is
boundless love!, we all do: let’s update the phrase

—it is the lack of boundlessness we die for: once
I wrote an essay called “I was a Teenage Vampire”

because I played a game called Vampire and this
was an attempt at reckoning who I’d been:

sometimes I had feigned delicate, whipping
my body with some feeling inside of dance

into despair, tragedy; sometimes I was feral,
imagined my hair matted as it had been once

when, a child, I failed to care for it, allowed
a single knot to emerge beneath the soft, shining

surface, as if wrapped around a burr of rancour,
shame, unextractable: in Buffy there’s an episode

where the vampire wannabes show up, some
marquee Goth club underground turned panic

when the threat gets real, the kids in love
with death not at all prepared to die, not

at all prepared for the netherworld of pain,
not when all that pain already brought them

there into escapeless dark, not when they’d
already given themselves new, darker,

at long last important, but actually just more
discards: like when Buffy discards herself,

becomes a moment Anne, anonymous, invisible
as any disregarded waitress receding to the kitchen:

how many ways did we all try to forsake ourselves,
who we were, where we came from? to burrow

our imaginations toward some greater strength?
how did television offer up this great quaking

amnesia, the chance to roleplay into possibility:
and how often did we end up back there crying

in our bedrooms, unable to articulate the ache,
saying again, horrible is still coming, saying,

what does it mean, to fully internalise
surveillance?: the girls are in trouble again,

and the panopticon lives in their guts, their
racy hearts: they know it, their guilt, their

perceived guilt, their guilty selves, buckling,
entrapped, and they expect it to come for them,

to come in messages on their televisions, in
their food, through their teeth: their therapist

knows something’s wrong too, but she has
her own panopticon to counter, to evade, so

her efforts to help are rendered impossible
by the need to cut off before confession is made:

the dolls are spouting their lines again, desperate
banter, and they’re my lines, the lines that say

it’s okay, I’m okay, the rope of self-surveillance
is not yet too tight: is that proclamation, I’m

okay, the source, twinning girlhood and
dishonesty?: (and how long have I been saying

I’m okay?): the liars, their bad decisions, are
to blame for the game, for the torment, for

goodies (labels, of course), the taunting fears
that come with the closet, and those secrets

curdle, sharp-fanged, till they are corpses:
(my teen-angst bullshit has a body count):

once they succumb to the fear of all that
watching, being watched, of course they face

mortality: even when they’re not being
punished, they’re being punished: no matter

photo, the one that sends the media wild,
presides, she’s gone: she’s gone, but she’s

everywhere: this is girlhood, this haunting that
undergirds the giddy Gravitron of fear and sex

and being seen: a psychologist would call it
development trauma—has—the onslaught:

revealing the self is removing a scab, a scab
the secondary lesion, the coating of the wound

healing reconstruction phase: sometimes
the wound still has blood to give before

it hardens into maturity—at least I think that’s
what we call it, but what would I know?: forty

and still trying to understand whatever happened,
still bound by the feelings of a loss that feels

like freedom —until it shows itself to be a trap 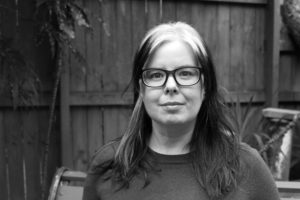