internal medicine practitioners, a mom’s or a dad’s caretaking,

mobility, sense of self-value, genetic continuity?  All of that yes?

You too may commit to move to the middle of nowhere,

Befriend the fourth man in overalls holding a handsaw walking your road.

Not the first three guys.  You miss those chances unpacking.

He forms words after a month.   Is he even a neighbor?

Half a year, he checks on your house (calls it recon)

as you look for quarry work.  By the guano, he capsizes

his wet motorboat to dry.  The week forecasts storms.

Often he leaves your porch littered with fitted hats

featuring either out of business or out of existence gas

He discusses retailers to avoid in town, the haunted bakery,

why he’s not allowed in any post office or church steeple,

what trails bisect sources of gutter water.  He shows you

asks you by telling you which you enjoy best.

You learn to throw your voice to mimic a hound howl.

Employ that sound instead of replying, or simply shout

they’re both the bomb! to feel your urbane roots again

converse with the fourth gentleman.

Who cares about the vice-mayor’s opinion, police chief, every eagle scout,

the chef of the last diner providing the only source of dairy, thoughts

who flogs you until you buy in full?  Does anybody 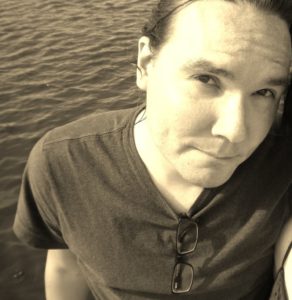