Perhaps there is any yes worth giving the blanketsoft and mugs to. Perhaps a months-ago latched staircase curse. Such pollination forever and forever is very little a difference. There is blue and orange and a triangle to rationalize. There is purple and an umbrella. Is there any monstrous noble with a plate for a way to see things. No, a wind is a redness a sparkle blueness and violet is altogether occasional and optional, dependent entirely on the maladaptation of engines.

A blue bow bird is a thing a volume of particular behavioral landscape, not a root-fisted nothing for the pocket. No place in the someday expansive exchange for a table, a violent question in the home’s eternal middle. Center carnivorous orange, the red of a fruit is potential bedridden calculus. It is whatever it says it is. How powerful the countertop if only in deciding.

We so desire to be an olive wished seedwise. For every train in memory another hollers closer scrapes the eardrum afternoon, re-monstering whatever is not the sun but cast upon us fracture. Winged in pieces pieces each a particular unhinging, a mouth birthday desires actual plastic retraction. A break is of itself. Water comes and it comes from somewhere, the spectacle does doesn’t it. Burning burning burning. Famished.

The devastation is cancelled. Sewing what the red blue breadslice a little wound, it is not even like that, it is not even as if a kite has no vinegar thread at all. Greed suggests of a rhombus inexplicable pain and how disappointing, for the hot salt and the bus which was us for a time, shoebox and no boys in streets the whole thing. Some kind of steeple rapid for creatures, the hurricane midnight offices. We stacked cities fire-licked refuse nesting chemicals within the beautiful flammable. You have austerity and the squirrels, anyone could say it. A gate is a great sapphire loss. It is lost. 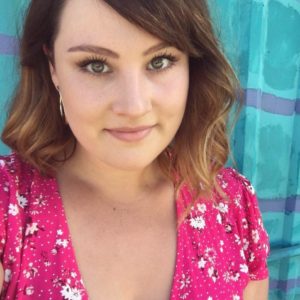 Erin Slaughter is editor and co-founder of literary journal The Hunger, and the author of I Will Tell This Story to the Sun Until You Remember That You Are the Sun (forthcoming from New Rivers Press in 2019). Her writing has appeared or is forthcoming in The Rumpus, Prairie Schooner, Split Lip Magazine, New South, Passages North, and elsewhere. Originally from north Texas, she is pursuing a PhD in Creative Writing at Florida State University. You can find her online at erin-slaughter.com.