The heart opened, and inside it was a boardroom. A desk, some laptops, a uniformity of smiles. An office that would make more sense in space, all of us floating around in a continuous team-building exercise. There are stories of tiger petting at conference receptions and a Porsche being delivered to the smallest of private islands. Why is nature out to obliterate all the custom paint? The promotion is inflatable and promises executive aura. The demotion, petty––occasioned by a small number of envelopes mailed by mistake. They’ve found my shoes, red and sharp, with sand in the toes. I had stored them here for meetings and moderately late nights on the town. How can I get 7 hours of sleep in 1? Work becomes uncomfortable, like being forced to wear a mascot’s skin. Meetings should be vandalized, something to give the once-over besides a leaky flow chart. Each X on the calendar just another day to dine. The office runs my toner dry. Ideas could hemorrhage if voiced. An alarming confidence dissolved into cheap coffee; now, even in private, I hesitate to share my life. The boardroom echoes through my body until I snap at store greeters, then fill my brain with regret. I’m gone, no one’s there, but at least there’s some furniture and a vending machine, and a place for breaks inside the heart.

Information accelerated, and after that, the world. Launch me like a satellite, let me gather intel, embrace the private conversations. There is a music to the mundanity. When you say I love you, you are conversing with a monitor. I am simple. A vessel to hold frustration and desire. I have been shut down improperly so many times that my warranty is void and I owe the world nothing. Sometimes, I miss myself, but that’s so twodimensional. Maybe technology divides us because it’s rooted in the binary. Our data forming communities, and we’re the neighborhood watch. We became so advanced, the computers felt abandoned. Everything known and treasured eclipsed by ourselves. It’s like living in an airport, a tenant in a vacant space, the flow of life, commerce, liminality. Though rarely self-aware, we discerned our former lives: a few numbers planted in a gap between breaths, without a password, mouths open: the secrets, here they come. 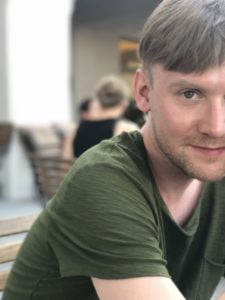 Drew Krewer is author of the chapbook Ars Warholica (Spork Press). His work has appeared in Troubling the Line: Trans and Genderqueer Poetry and Poetics, Diagram, Fairy Tale Review, and Poor Claudia, among other publications. He holds an MFA in Poetry from the University of Arizona and lives in the desert.