in which our bodies formed a crossroad, an x

it was not that I did not see it, but that I feared forgetting how

an angle, a spandrel

a letter written in invisible ink in the

to a place tender

to a place of knives and roses, to aces

their own terrible leaves

where the dead are positioned at folding tables,

so that the scene appears lively

it is not a distraction it is an invitation

(self portrait in a clouded mirror

self portrait leaning against itself)

let x be time, and how it indicates not decay

each an x, in themselves,

a pattern emerges, a process:

(is it that I am at home in my own loneliness, or that I am not yet

complete?) (that I could easily be torn in two) (that I wanted

to be rent asunder)

house next to the highway where a girl rides a horse in a circle, a round

is a girl with land what you want

down, shaved just a square of land, on

thighs and they thought this is america. this is my daughter

riding in a circle

her hands in biscuit dough

what they must feel

& what do I do with her how do I care

the spiral on the back of a baby head where the mind folds and unfolds flag, christ

peering out from the wheat fields the fact is

born into yourself—self-birthing in which

if you were your own mother?   it was not a nymph, but a mother I saw

you have seen in yourself

you have seen in the wheat

what you have seen

in the wheat sees you back

dress at the window, at this

address at night a dress

do it full time never

tell anyone about it

but when I put it on I felt

all that light in in the upstairs

room I felt myself

ice crystals on roots on fire

get dressed go out to the cows

when was the last time you

felt anything soft when was the last

time you felt anything that good 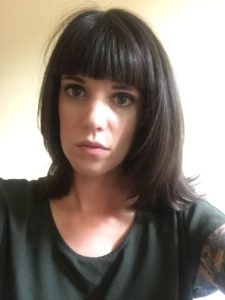 Denise Jarrott is the author of the chapbook Nine Elegies (dancing girl press). Her poems have recently appeared or are forthcoming in jubilat, Beecher’s Magazine, Zone 3, Grimoire, and elsewhere. She grew up in Iowa and currently lives in Brooklyn.