Caught up in a televised matrix

depression lithe as a forefinger

steady as a forecastle

winding around the brain stem

the frightened voices of the lost

into a hypersong, excited breaths

until it all collapses: the sun’s gone

out, the sun is out and killing everything,

the sun as an allegory for patriarchy,

the sun as a fixed wanderer,

the sun as another deadbeat father,

the sun as another kind of matrix,

the sun as another apology for depression.

wound around another set of stairs: always travel,

the puppet is an image of yourself

the spring and clown dress is your prison

and no matter how they sneer behind you

the expectation is that you rise: only high roads,

only avenues for tolerance, only love for your enemy.

A spirit rises above the trees too, like wind.

But how do you defeat the wind?

How do you swallow the sun?

The trees are daring and stable and live out long years.

I dress myself in as many leaves as I can gather

I cover myself and dig myself deep into a hole

I stand apart and within and wait to be discovered

There are no seeds that I could give to live. And the house calls:

Praise to the Fatberg, for she is queen

her core: tampon and hair. Blessed are her layers

that route their way through her court and labyrinth:

the sewers, dark and empty from a world’s waters

floater is she, wibble-mass brisking her wide hips here, there

as she anoints. She is kin to the her great sisters,

the fatbergs that have stopped up the pipes,

the fatbergs that make so many homes

until all down here is lakes: a Grand Coulee,

a Roosevelt. She is plasticine and matter,

made and unmade and made forever: a god.

may one day she be too large to fit, clogging the turgid darkness

may she bless every shitpile she encounters with her wideness, her height

may she be fed forever by the makers, the shit-leavers, the knowers-of-sky

may we, particles left behind by everyone, become her outer clothes

I’m always in a hospital, in a state of transition from one hospital to another hospital.

There’s no life without medications.

I wonder if it all works or if it’s a lie we all keep telling.

There’s a day coming where I’ll be nothing more than what’s there in sewers: a dark ichor underground.

If I’m lucky I’ll be worthy then.

If you think about it, in a tall building, at any part of the day, shitwater is coursing past your head.

Much of a hospital is shitwater.

Let it sink into you: there’s always shitwater underneath or behind you, inches from you but just out of sight.

If I’m honest, here’s a lie we tell each other: I’ve made it out of the hospital.

there’s a fatberg that made it out:

she sent herself away in bits, letting bits think yes, I’m free when all along they were still hers. she sent them out as insurance in her scheme: a dividend to the new ocean, wide and red-rimmed by fire, and a dividend to the ancient one, a bath of salt. the old ocean never worked out, but her parts flourished in the larger one. she sent the bits out to find each other, letting them think yes, I’m free, and these bits here, they are like me, let’s be like bits together, shan’t we? parts weren’t her, but most of them were, and she began to feed, finding a nice cradle of softly moving water, absent of current, until she began to swirl, shifting her consciouness’s residence from the pipes into the large water basket, a land without pipes, with other great masses like her: sperm whales, orcas, octopuses, sharks. she outshone them all, taking on the cargo of sinking ships, a million and a half ping pong balls, a tankard of rubber ducks, so many bottle caps and the net of enough aluminum cans to build a new ocean made entirely of synthetics: a miracle lace. after years, she became so large so as to extinguish local sealife, so as to be visible enough to the makers to name her: GREAT PACIFIC TRASH VORTEX, wide as a dreamfield, visible from space™.

there are fatbergs who gather together in circles with their arms of medical gauze, prescription drugs, hair, strings, and such stretched to the center, the sisters repeating her scheme, letting go of themselves in bits, giving up temporal excess for an eternal gain: to be a swimmer such as them outside the labyrinth, outside the pipes, to not become stopped up but the float on and on forever, to outlive the makers under the makers’ own sky.

Call me Red. I was born in the cool

sweep of the blood-dark waters

outside the reach of those who walk

I learned to dance among schools

blowholes rows and rows of teeth

pyrosomes as long as seas

life among decay was my medium,

was my vanity, my dressing table,

my bookshelf, vehicle, and meadow

Poison to you was my homeland

I remember the pack mother dancing me

up from our quiet deep to teach me

how to remove my skin, spotted fat blub

thick with brown and cream

I unzipped myself from myself for the first time

eyes as black and winedark as home,

hair the color of wildflowers: purple,

They killed your eyes

Your eyes are as wide and flat as the horizon, dark and deep

where once I could see you swimming there, in your eyes, only an

a dark room without windows and doors

I came to land to destroy

I walked my miles of landgoing flesh, ripples

and valleys and swamps and fields was my skin

In these folds I held your memory: a warm papoose

I gave myself until sunlight to find them, the ones that took you with a gun

dog yells removed of your personhood, kept from your skin and the deep

and the waters, the rivers of tears that is our country

Flowers don’t only grow on land. A flower is a set of leaves that you give meaning to: beauty. A flower can be the blades of kelp that grace my fat sides as I swimmed with you in the menacing, beautiful dark of our world. A flower can be the worms that feed up from hot spots like tulips, or the many living things that move when you touch them. A flower can be the detritus growing on the skein of steel chain that ties a buoy to the ocean floor, the green and blue and yellow patches of sea lychen, the red fever of rust and salt. A flower can be a face with whiskers, a face with a pointed nose, skin brown and spotted, slick and fat.

I need another flower.

I see it as a red hibiscus, opening with the sun

that is a knife or a bullet, the petals writhe out

into a bell and out with the stamen, the pistil,

a surge of red wet with red, a spray flower

One or two red flowers can open up an ocean

on land, spilling as a river that eventually becomes a sea

I pick up a candle from your vigil and carry it in my hands, letting the wax enrobe my flesh in paraffin. I walk to the shoreline and put my skin back on, holding the candle as I walk through the rippling, waving door into home. The candle touches the water, is swallowed by the water, but look: the flame does not go out. It burns like a memory in the brain, this flame in the ocean

and in the depths

I see you before the murder:

a creature like me, one who is of two worlds: land, 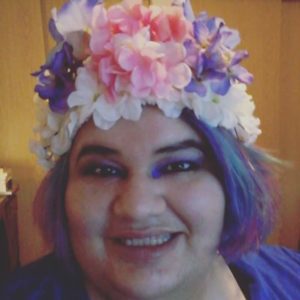 Chloe Rose is a fat, queer, femme, non-binary person of color living with disabilities and her cats Franz and Luna in Tacoma, WA. They have been published by the Atticus Review, The Wanderer, Aspasiology, and will be published in GLITTERBRAIN this fall by Anomaly Press. They enjoy writing poetry, essay, and fiction, as well as tweeting about conlangs, antifa, witchcraft, and such as. Brown brown brown brown brown brown brown. @chloeandsuchas www.chloerose.space #spacewitch #yerbamalanuncamuere