A Symposium of Hush

clandestine banana chewing under a laboratory desk at noon—

when the witch stops burning—

anything red in a swimming pool—

the tide as remembered under the influence of horse tranquilizers—

a ghost in stone—

Lantern flame 30 miles away on a clear dark night.
The released chimes.
A body kicks in bed.

A body on the street.
A body gone.
Some nobody bleakness.

A tarot telling untold alias.
One drop of eucalyptus in a mug of water.
The Priestess tumbles over her robes.

Switchblade chevalier in crow pose.
Two heaps of brown sugar in the kitchen sink.
The Sun obscured by pockets and pockets of nouns.

A bee’s wing falls on your sleeping cheek.
But the World undulates wet glyphs.
There the window and continents contend. 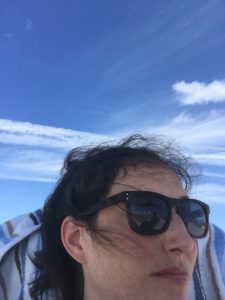 Cate Peebles is the author of four chapbooks, including The Woodlands (Sixth Finch Books, 2016), and James (dancing girl press, 2014). Her debut collection, Thicket, won the 2016 Brigham Award and is forthcoming from Lost Roads Press. She is an archivist, currently working at the Yale Center for British Art in New Haven, CT, and a co-editor of the occasional online poetry magazine, Fou.