He was in the brook,

a love note sealed with a wax drop.

We did what any young girls would,

we laughed, thought him ridiculous,

when, he took one giant step,

we ran over slick shale and loose slag.

The family barbeque a din through the long column

of trees. We could hear his beating breath,

the rise and slap of his gait.

The path grew light as the opening, a winged

beautifuls running from the sex that would one day gag

us with its black feathers.

In Case of emergency /pull / the handle back, / as the air grows thin / the pilot / That’s all — That’s all. / Will you choose the children first, / help the mothers with their life vests, / put your oxygen mask on, / keep cool as the panic of others grabs  / you / knowing that the black box / with its inscrutable brain / will tell the whole story? / You will have several minutes / before hypoxia dims your memories / It was you who rubbed /Silly Putty / deep into the tweed sofa / lied about it  / resulting in your brother’s / broken engagement. / You who French kissed John / before he was ready to open his mouth. / And you who broke / into St Vincent’s / steeling the bag of hosts  / to give out at recess  / This is the body of Christ. / Amen. /  And you / who thought, while boarding this plane, / you had enough. / Do it  / Open the metal rib cage / toss the others out  / like paper petals / before the sudden / decompression / tears the roof off / watch each one of them sink into the unrest of the ocean / Gulping / every /one / down. / Yes, you say / I promise to know where / to end. 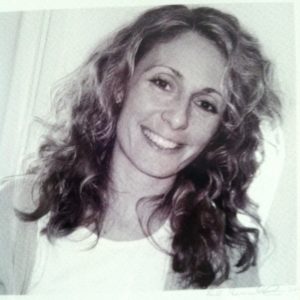 Mary Lou Buschi’s collections of poetry include Awful Baby (2015), Tight Wire, chapbook (2016), Ukiyo-e, chapbook (2014), and The Spell of Coming (or Going), chapbook (2013). Mary Lou’s poems have appeared in many journals such as Radar, Willow Springs, Thrush, The Laurel Review, Field, among others.